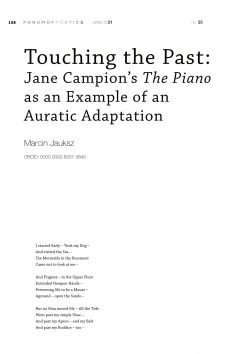 In this article, I attempt to define a new phenomenon in world contemporary cinema. Thanks to new visual means of expression, with a focus on their haptic nature, film tries to recreate moods and sensitivities associated with the past. As an informed reading of Emily Dickinson’s poetry and Emily Brontë’s Wuthering Heights, Jane Campion’s The Piano becomes an example of a plot that is, on the one hand, filled with perspectives, motifs and situations from these works and, on the other hand, thanks to the stylistic multisensory nature of cinema, recreates the nineteenth-century dynamics of relations and moods recorded in historical sources in specific characters and objects. Thus, it becomes an auraptation (auraptation: auratic adaptation), an adaptation of the aura found in the literary testimonies of a given epoch. It translates a story that was not created in the nineteenth century into the present and the contemporary media.