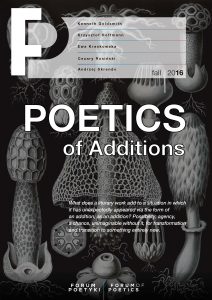 The concept of this issue of Forum of Poetics, the “poetics of additions”, proposes a discussion of texts and non-texts that nowadays accompany the literary work. Until recently they were studied within two paradigms. Within structuralism, broadly understood, one generally acceptable model was Gérard Genette’s formulation of “paratexts,” whose various forms he carefully examined and whose relations with the main text he delineated. In post-structuralist studies, on the other hand, these paratexts were known as supplements, which in Derridean terms nullified the “closed” nature of a work, put into question the centrality of the main text, and deferred the moment of its’ meanings’ convergence idefinitely.

Contemporary relations between the main text and its paratexts would appear to possess a degree of intensity beyond any previously encountered, and that has now reached the critical point that begs for new theoretical analyses. On the one hand, the literary work has lost its inaccessibility and uniqueness, become fungible, compressible, capable of being replaced by gadgets, film trailers, or animated films. The production of additions is unflagging, and the literary work itself can also, naturally, be another addition, as for example when we read a novelization of a film. This relates primarily to brutal and often aggressive processes of commercialization, but sometimes involves the basic pleasure of using a beloved work’s structure, developing its imaginative apparatus, and recoding it. On the other hand, that very process can be formulated in a completely different way. The work passing through various forms of additions into new places and situations is not only transformed, but also reveals its own ability to transform other things. No matter how it changes or becomes recoded, it often manages to become a causative factor, to exert influence and provoke to action. It is fitting now to read the testimony of poet Kenneth Goldsmith on his experience of deconstructing Williams’s “Red Wheelbarrow” with a group of students and finding, in the end, that even the smallest fragment of the work continues to possess its own inexhaustible reservoir of activity and causative force. We can also mention the alternative history of mimesis described by Horst Bredekamp, who observed that sometimes the original loses nothing through being copied, but on the contrary, acquires new causative potential from its copies. And what does a work add to a situation in which it has unexpectedly appeared via the form of an addition, as an addition? Possibility, agency, a chance, unimaginable without it, for transformation and transition to something entirely new.

The rest of the articles in this issue can thus be read as documents of the contemporary clash between two completely contradictory aspirations – one toward reclaiming the energy involved in the production of additions, another toward its liberation and reactivation in unexpected places. Kenneth Goldsmith reconstructs our contemporary psychoparatextual life world before observing that reading James’s Portrait of a Lady puts us entirely at the mercy of its transformative effects. Andrzej Skrendo analyzes the unusually creative practice of adding in the poetry of Tadeusz Różewicz, who was constantly experimenting with the capacity of a text to shift to new places. The new status of documentary film recordings accompanying events in the literary world (meetings with authors, poetry slams, and so on) allows Piotr Pławuszewski to consider those qualities of filmic additions that preserve the transformative energies of literature and those that squander their allotted chance at artistic expression. Konrad Dominas describes the functioning of the literary work in complex entertainment supersystems, the disquieting leviathans of the entertainment industry. Through analogy, however, that industry provides Inez Okulska with material for an astonishing glance at the problem of literary translation. Piotr Gorliński-Kucik shows the innovative use made of the concept of a work’s creation via additions in the latest science fiction novel by Jacek Dukaj, which dispenses with the medium of the paper book. The problem of the addition is also the main question addressed by Stefan Szymutko’s utopian (and to this day cognitively stimulating) scholarly project; Łukasz Żurek underscores the fact that the footnotes to Teodor Parnicki’s historical novels obsessively developed by Szymutko became the reason for his fascinating scholarly failure. Discussion, in the form of definitions, of the blurb (Ewa Kraskowska) or the book trailer (Cezary Rosiński), reveals old and new methods by which various media produce additions. Finally, reflection on the additional nature of episodes in older, classical poetics (Helena Markowska) collides with remarks on the latest theoretical proposal relating to the category of the “sequel” as applied by Paweł Mackiewicz in his book on the poetry of Marcin Sendecki (Krzysztof Hoffmann).

Konrad Dominas, The Text And Its Additions, Additions And Text – From Entertainment Supersystem To Cultural Universe

Piotr Pławuszewski, Not Just for the Archive. On the Literary Event and Documentary Film

Piotr Gorlińsk-Kucik, The Relocation of Literature

Inez Okulska, From Intersemiotic Translation to Tie-In Products, or Transmedial Storytelling as a Translation Strategy

Helena Markowska, “Additions” and the Category of Unity in the Poetics of Post-Stanisław Classicism