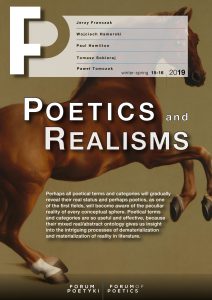 We are witnessing a renewed interest in the real in contemporary humanities. The need to reexamine the relationship between language and what lies outside language calls for new understandings of Lacan’s Real, speculative realism, and, thanks to Paul Hamilton’s study, Realpoetik. Especially this last example should make us realize that poetological studies can animate contemporary humanities, because realisms have always occupied a prominent place in the repositories of literary styles and conventions. Indeed, realisms prove inspirational in our study of how to establish a connection with the real. It is evidenced by the (unfortunately not fully recognized) democratic potential of most historical forms of realism.

At the same time, an even more interesting and unexpected process is taking place. Poetics in general is increasingly seen as a meeting place with the real. For decades, such notions as the “narrator” have been used as descriptive tools. However, they should not be treated only as abstract entities or “categories” with no connection to the real. As noted by Paweł Tomczok in his innovative article, “the narrator” is one of those entities that hesitate between hiding and disclosing its real status. The narrator is one moment experienced and felt as real – he may be endowed with a voice and perform not only textual gestures – and the next moment he transforms into a purely textual entity. Indeed, perhaps all poetical terms and categories will gradually reveal their real status and perhaps poetics, as one of the first fields, will become aware of the peculiar reality of every conceptual sphere. Poetical terms and categories are so useful and effective, because their mixed real/abstract ontology gives us insight into the intriguing processes of dematerialization and materialization of reality in literature.

Hamilton’s book was the starting point for this issue of Forum of Poetics. It served as a reminder that Romantic poetry could be read in terms of political realism in contrast to the then popular and cynical political pragmatism, which later became known as Bismarck’s Realpolitik. Wojciech Hamerski in his article writes about unique, i.e. different from those described by Hamilton, ways of looking at Realpoetik in Polish Romantic literature. Ewa Paczoska, whose book is discussed by Tomasz Sobieraj, proposes to read the classic realistic novel as the cooperation of two writing modes: the critical mode and the empathetic mode. Jerzy Franczak returns to the Barthesian “reality effect.” In his analysis of Flaubert’s works, Franczak proves that Flaubert’s realism was not conceived of as only an illusion of reality, but rather a more complex mechanism of democratization of all social practices, to which Jacques Rancière has pointed in his readings of Flaubert. A similar approach can also be found in Gerard Ronge’s article devoted to a critical reappraisal of Roger Garaudy’s notion of realism without borders. Ronge argues that the contemporary debate about “engaged literature” should also take into consideration the important role played by realism, both as an aesthetics and a movement. Osman Firat Baş in his reading of Snow demonstrates that Orhan Pamuk in his novel employs an innovative form of realism. Respectively, Agnieszka Waligóra demonstrates how Tomasz Pułka constructs in his poetry a unique system of literary possibilities offered by realism. Iwona Misiak, in turn, points to the importance of the current editions of personal documents and accounts written by women. Finally, this issue of Forum of Poetics is complemented by Elżbieta Winiecka’s review of Jerzy Madejski’s Poetologie postrukturalne.

One thing becomes clear after reading the current issue of Forum of Poetics – the poetics of the real and the realness of poetics may bring about a critical reappraisal of contemporary literary criticism.

Paweł Tomczok, The Reality of the Intermediary

Agnieszka Waligóra, Mise en abyme – Anti-realism? On the Example of One Poem by Tomasz Pułka

Tomasz Sobieraj, “Critical” and Empathetic Realism: Modernist Writing Projects (of Prus and Others)

Iwona Misiak, Letters and Diary of Anna Moszyńska: The Obverse of Conversation, The Reverse of Madness

Elżbieta Winiecka, A Republic of Dreams of Literary Studies