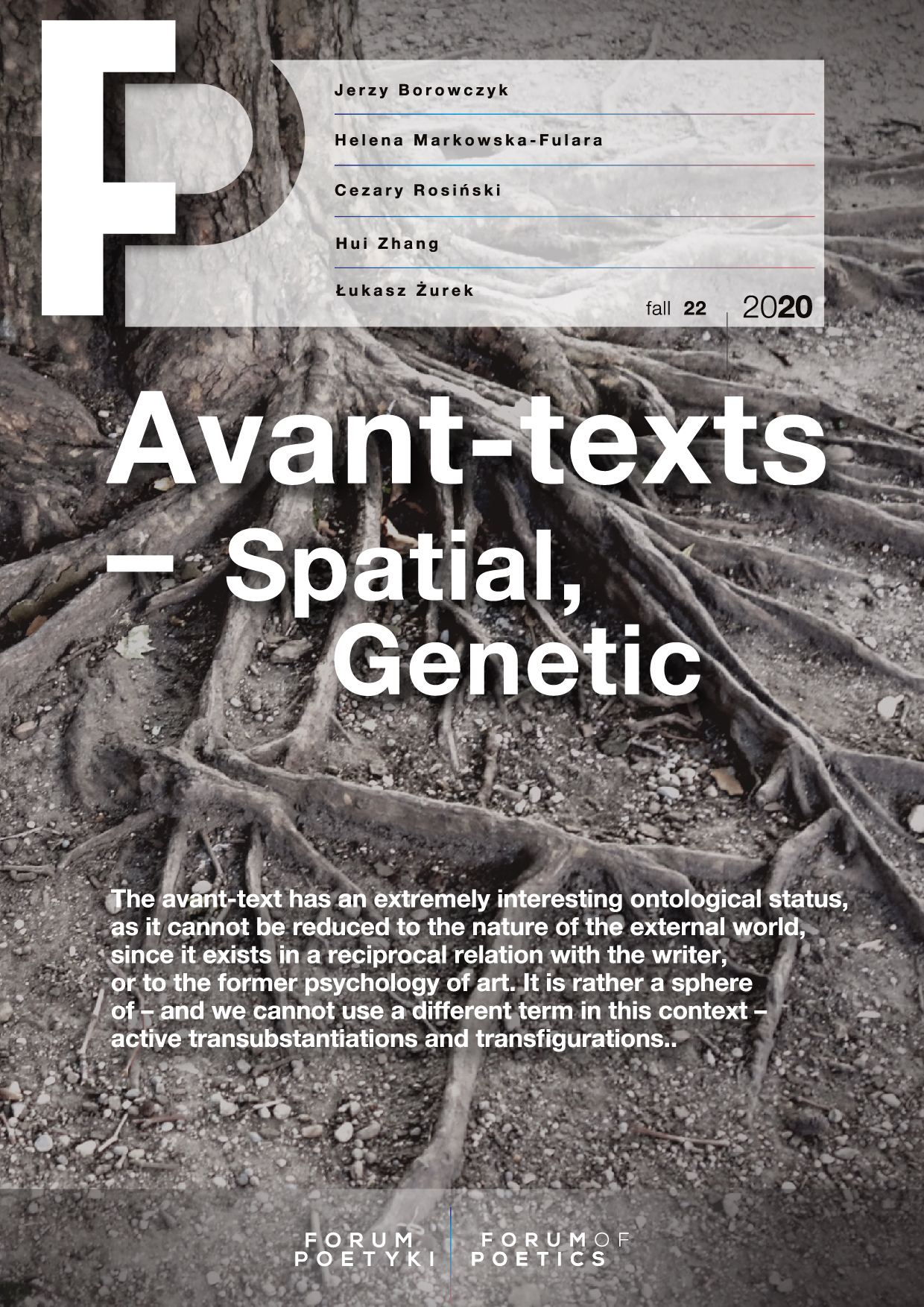 The avant-text, one of key categories in textual genetics, has considerable potential for semantic expansion. Avant-texts – which precede the final textual form of literary works – are not only manuscripts or typescripts. Indeed, they may not even be texts, but, for example, experiential avant-forms, such as forms of experiencing space, to which the author continuously refers in his work. The avant-text, by its very nature, is a complex term, comprising multiple unpredictable writerly factors, tendencies, and stimuli. The avant-text has an extremely interesting ontological status, as it cannot be reduced to the nature of the external world, since it exists in a reciprocal relation with the writer, or to the former psychology of art. It is rather a sphere of – and we cannot use a different term in this context – ​​active transubstantiations and transfigurations.

Transubstantiations refer to constant changes in how various phenomena, facts, and elements function. For the individual, they become – suddenly or over a longer period of time – stimuli for writing. They provoke creative gestures and careful artistic shifts from the sphere of the non-literary to the (tentative) figurative. Transfigurations, in turn, refer to the cognitive, mental, and physical process of constant self-structuring of this active “magma” of the proto-literary. It is often the case that the writer, provoked to write, engages with them individually, and one figuration often gives way to other figurations.

This intense examination in poetics and literary criticism, that is often graspable only after the “creative act” comes to an end, sometimes in a very discreet or fleeting way, makes one approach the “avant-text” anew. This is precisely what we explore in this issue of Forum of Poetics. Cezary Rosiński critically examines the problematic situations of spatial attentiveness as stimuli for writing. Hui Zhang, on the other hand, analyzes how travels to China influenced how Chinese culture and state are represented in the works of Boris Pilnyak. Representation varies, depending on “avant-textual” reformulations, which Hui Zhang traces in Pilnyak’s prose. Jerzy Borowczyk studies more typical kinds of genetic avant-texts, investigating how Włodzimierz Odojewski worked on the openings of his works. This is an extremely instructive analysis, as it demonstrates how much work is “invested” into the beginning of a text, which strongly determines the reader’s “first impression”. The role of the avant-textual is prominent. Transubstantiation and transfiguration are hard at work. Łukasz Żurek expands the genetic understanding of avant-texts, analyzing documents that are seemingly non-literary, including the writer’s private notes on the margins of books. The analysis of Stefan Szymutko’s notes allows Żurek to identify readerly avant-texts, i.e. the first writerly/readerly stimuli, which, in the process of transfiguration, made their way into the Silesian philologist’s academic texts. Respectively, Helena Markowska-Fulara argues that questions that Adam Mickiewicz was asked during his M.A. exam at Vilnius University might have been avant-texts of some of his works. A careful comparative analysis of the exam questions and Mickiewicz’s later critical and literary texts demonstrates how this specific avant-text functions in the works of Mickiewicz. Maciej Wcisło analyzes how Józef Wittlin obsessively worked on different editions of Hymny [Hymns]. This passion for modifying and re-creating demonstrates the transubstantiative and transfigurative power of Hymny’s “avant-texts.” Gerard Ronge reviews Barbara Kaszowska-Wandor’s book on the history of the concept of “Res publica litteraria.” Perhaps, the sphere of avant-texts also comprises apt metaphors, which, like (Mieke Bal’s) “travelling concepts,” provoke writing.

It is difficult to judge whether the “avant-text” will become a contemporary “travelling concept,” but it certainly encourages us to examine the sphere of various proto-literary impulses and their ontological status anew.

Jerzy Borowczyk, Struggling with the opening. The avant-text of selected short stories by Włodzimierz Odojewski (based on materials from his Poznań archive)

Łukasz Żurek, What does the philologist’s library make possible? The case of Stefan Szymutko

Hui Zhang, The Image of China in the Eurasianist Ideal of Boris Pilnyak: From the Imaginary to the Documentary

Helena Markowska-Fulara, Mickiewicz’s pretexts, or comments on the margins of archival research

Maciej Wcisło, The works of Józef Wittlin: The perspective of genetic criticism

Gerard Ronge, A study into one metaphor