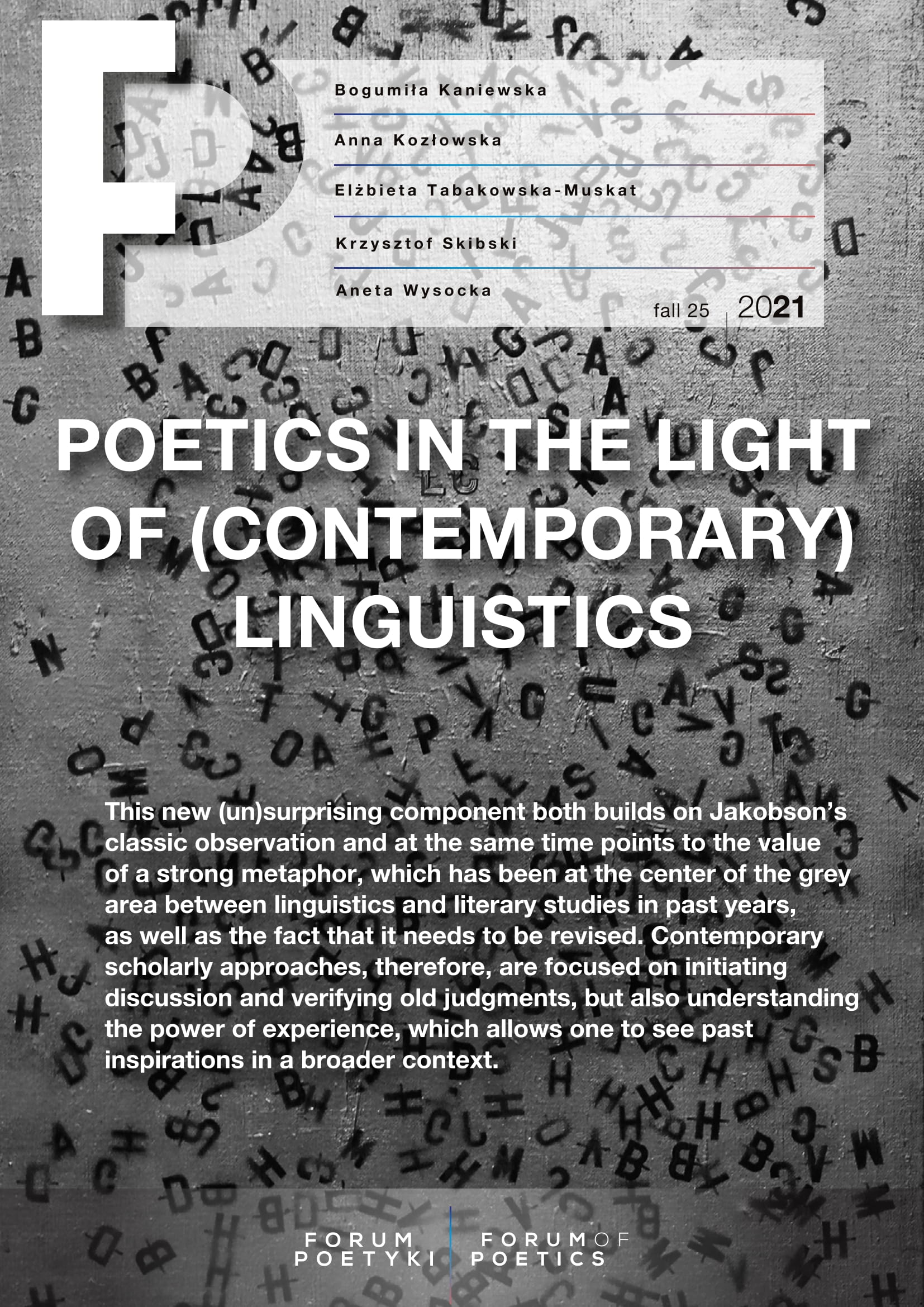 Undoubtedly, this issue was inspired by (and, hopefully, inspiring as regards) the reflection on the new and the non-new in grammar and poetics. While in themselves grammar and poetics are rather inconspicuous, when conjoined, the two look very promising.

First of all, because of the title: Poetics in the light of contemporary linguistics. This new (un)surprising component both builds on Jakobson’s classic observation and at the same time points to the value of a strong metaphor, which has been at the center of the grey area between linguistics and literary studies in past years, as well as the fact that it needs to be revised. Contemporary scholarly approaches, therefore, are focused on initiating discussion and verifying old judgments, but also understanding the power of experience, which allows one to see past inspirations in a broader context.

Secondly, linguistics and literary studies have developed methodologically, which has only rendered their shared interests more compelling. This often results in more in-depth readings, returning to older texts, and, at times, also the need to reevaluate and/or reconsider the known (the repeatable, the given, the intuitive, etc.) in language.

Thirdly, the latest advancements in technology, including the Internet, allow us to study and analyze cultural texts in a way that was unimaginable in the past; metaphors, ambiguity, and multimodality are all addressed anew in a manner that is nothing short of a revelation.

The articles in this issue of Forum of Poetics are thought-provoking, especially when it comes to these three aspects. Elżbieta Tabakowska-Muskat points to transdisciplinarity, which blurs the boundaries between literary studies and linguistics, allowing one to exploit the full potential of philology and, above all, to recognize the role of experience (the world and grammar). A condensed analysis of Tuwim’s short poem Życie [Life] allows the reader to see that such approaches do indeed stem from the achievements of cognitive linguistics.

Magdalena Piotrowska-Grot draws attention to the peculiar functionality of enumeration in Julian Kornhauser’s poetry: an attempt to reclaim fragments of the past – at least partially – to extract them in and through poetry, and compile them into an imperfect list triggers reflection on the need to save fragments of the world in language. Fragmentation, stronger syntagms, and strong metaphors in Julian Kornhauser’s poetry are new ways of dealing with the non-new.

The theory of cultural scripts (mainly in relation to Wojciech Młynarski’s Lubię wrony [I like crows]) allows the reader, as Aneta Wysocka explains in her essay, to examine how intersubjectivity manifests itself in language and further connect it (by means of an intertextual reference) with Jakobson’s classic lecture one from Six Lectures on Sound and Meaning, devoted to Edgar Allan Poe’s The Raven.

Syntactic, lexical, and graphic topicalization in Norwid’s works (analyzed by Anna Kozłowska) allows us to understand the significance of the thematic and rhematic in Norwid’s works (and thus to expose what is given in poetically non-obvious terms), as well as to take a closer look at the “strategy of excess,” which re-orientates the ways of reading these seemingly non-new texts.

The reader may learn more about new ways of representing the world (this time in reference to assemblage) in Bogumiła Kaniewska and Krzysztof Skibski’s essay, which explores the unique nature of Magdalena Tulli’s early prose, specifically in the context of the entropic tale. In this case, excess emerges as one of the key categories in the grey area between linguistics and literary studies (described in a transdisciplinary perspective by Elżbieta Tabakowska-Muskat).

The new and the non-new have also been examined in even greater detail. Gerard Ronge examines “the new” as a (poetological, theoretical and literary) category, beginning with the ordinary and gradually, moving towards contemporary research on avant-garde art. Marek Hendrykowski examines memes and their multifunctionality (insofar as they are a “consciously structured polemic”) to demonstrate the complexity of contemporary cultural texts and their metaphorical potential. Marek Kaźmierczak writes about the metaphor in browser games in his review of Miłosz Babecki’s book (with a subtle hint of melancholy), referring to new research perspectives opened by game and media studies. Jerzy Madejski further examines the new and the non-new in his review of the monograph Wiek teorii. Sto lat nowoczesnego literaturoznawstwa polskiego [Age of Theory. One Hundred Years of Modern Polish Literary Studies] edited by Danuta Ulicka. Finally, Elżbieta Tabakowska returns as a poetess in the light of (contemporary) linguistics. Krzysztof Skibski’s analytical review of Językoznawstwo zastosowane [Linguistics applied] sheds new light on the poetics of grammar, and perhaps in this case also on the grammar of poetry.

Consequently, we have come up with new approaches to this ever-intriguing metaphor – this time it is Forum of Poetics in the light of linguistics (thoroughly explored in the articles published in this issue).

Bogumiła Kaniewska, Krzysztof Skibski, “If things are to go on…” – potentiality and entropy in Magdalena Tulli’s early prose

Magdalena Piotrowska-Grot, “I like this mishmash.” Enumeration in Julian Kornhauser’s works

Katarzyna Sadowska-Dobrowolska, The artistic text as an object of linguistic inquiry

Krzysztof Skibski, A poetess in the light of linguistics

Marek Kaźmierczak, In the web of metaphors