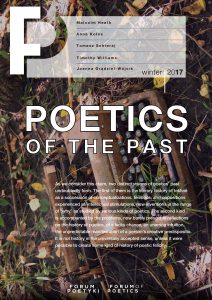 There is something astonishing about Malcolm Heath’s observation that the art of poetry is understood two different ways in Aristotle’s Poetics. On the one hand, tekhnê exists as knowledge of “why”: reasoned explanations of works’ correctness are given, metric principles tested, analyses of style and linguistic devices conducted, literary genres and their variations described and catalogued. On the other hand, tekhnê can be a component of knowledge possessed in a form other than verbalized and explicated rules. It can manifest itself in the form of knowing that something works, since many authors are interested exclusively in whether a given text has an impact on its audience and seek only certainty in the fact that their chosen compositional solution fulfils its function properly. Aristotle says that what matters here is the tekhnê belonging to the author’s “set of habits,” his experience, or finally– horribile dictu – his talent.

In the first case, knowledge of poetics becomes something we grasp conceptually, and therefore something permutable, something that can be transmitted or accumulated. In this case, the division between immanent and formulated poetics is not very relevant, since the former like the latter is understood as a set of rules capable of being extracted from texts and put into circulation as a knowledge of “why.” In that case, knowledge and tekhnê exist in discursive, intellectual form, and are linked with the speculative and theorizing operations of reason. In the second case, knowledge exists as a component of intuitive creative operations, and is reduced to the range of functions of “that,” dispensing with reason; it is an element in the creative workshop wherein new artistic forms are continually being tested by trial and error. We must thus think of such knowledge as present exclusively amid the repertoire of skills needed for competent artistic functioning, effective responses to artistic situations, successful solutions to momentary challenges presented by the form-creating process. Peculiar to such knowledge is that it is not accumulated, though it can be taught to adepts and transmitted as a skills set, and can awaken predispositions possessed solely by a given pupil, which allow him to achieve artistic possibilities available only to him.

As we consider this claim, two distinct visions of poetics’ past undoubtedly form. The first of them seems well and thoroughly explored at least with regard to certain kinds of writing. That is the literary history of tekhnê as a succession of conceptualizations, tensions, and oppositions experienced as intellectual stimulations, new inventions in the range of “why” as studied by various kinds of poetics. This loquacious, rather garrulous past of poetics can always be adroitly described in the form of lines of development, references, evolution, or ruptures. The second kind of past of poetics, on the other hand, seems to me much less susceptible to being translated into the form of literary history. It is not history in the universally accepted sense, but rather the past, an aggregate of many separate creative situations, individual experiences, artistic decisions that usually cannot be transferred into other contexts (and into the conceptual sphere), unique talents – fully realized, or partly exploited or squandered. It is accompanied by the problems, now barely present in reflections on the history of poetics, of a lucky chance, an unerring intuition, the unpredictable manifestation of a person’s creative predisposition. Unless it were possible to create some kind of history of poetic felicity…

It is not hard to come to the conclusion that both kinds of tekhnê have persistently influenced each other, and their past is history, at least, in the sense that it can be arranged in sequences of shared tensions or relations. It is not only Heath’s article on cognition in Aristotle’s Poetics that leads us to this reflection. Anna Kołos’s description of Sarbiewski’s important theoretical reasoning on the subject of the punch line, noting how it harmonized with his now-neglected skill in writing epigrams, is not far from this track. Marcin Jauksz invokes the authorial experiences of George Eliot, whose life partner wrote guides to success in writing, and reveals how the novelist herself sought to effectively incorporate psychology in her literary works. The poetry of Aleksandr Blok represents the fruit of an altogether different kind of creative process; the poet’s intuitive method defied rational conceptualization, though, as Timothy Williams shows, its effects were masterfully analyzed by Lydia Ginzburg. Marta Stusek and Joanna Wójcik offer analyses of two ars poeticas of Urszula Kozioł, of which one is closer to a poetics of “why”, while the other employs a deformation of language that impresses upon us how most contemporary versions of the programmatic credo are closer to the poetics “that.” The episode in the history of oxytonic rhyme from the end of the Siècle des Lumières brought to our attention by Agnieszka Kwiatkowska presents a good example of how the conceptual sphere of poetics sometimes overlooks the work of authors keenly attuned to readerly needs, working at the level of poetological habits and experiences. A similar phenomenon occurred in the poetry of the Positivist era, as Tadeusz Budrewicz reminds us in his book, discussed herein by Tomasz Sobieraj, devoted to manifestations of popular, “songful” poetry created on a mass scale during the period, again directing our attention toward a historical poetics of “that.” This reflection can further be extended to the realm of biography, as analyzed by Lucyna Marzec; now, more than ever, the poetics of biography seem balanced between “why” and “that.” The issue concludes with a discussion of Malcolm Heath’s latest book, in which, as Paweł Wolski writes, Heath has made a thorough study of the problem of classical authors’ deliberate “superficiality” as revealed in ancient philosophy, demonstrating that it might in fact enable a contemporary regeneration of poetological thought.

It is worthwhile to consider Malcolm Heath’s suggestion and check whether we can newly recognize the poetics of “why” and the poetics “that”— and thereby create an area of scholarship located outside the fields designated by recent gurus of literary theory.

Marta Stusek, Ars poetica as the Art of Survival: an Interpretation of Urszula Kozioł’s Poem “Tysiąc i jedna noc” (A Thousand and One Nights)

Tomasz Sobieraj, Structures in Sign Networks. On an Attempt to Reconstruct the (Cultural) Poetics of Poetry From the Age of Posivitism