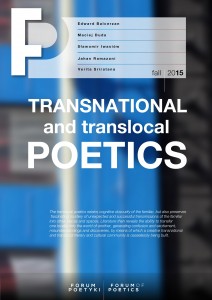 Poetics has joined the discussion developing around the ideas of world literature, post-colonial interpretations and reactions to the phenomena of globalization. Jahan Ramazani’s book A Transnational Poetics (2009) proposed a new definition of anglophone literature as the shared space belonging to many literary cultures, thereby highlighting the fascinating potential of the poetry analyzed in the book and delineating new areas of theoretical exploration. Rather than focus on recrudescent vertical tensions between literature perceived globally (cospomopolitan, easily transposed among diverse cultural realia) and local (convinced that rootedness constitutes a completely sufficient source of creative work, and one incomprehensible to outsiders), Ramazani pointed to the decisive importance of horizontal displacements. In them, the familiar retains its cognitive obscurity, while the process of unexpected and successful transmissions of the familiar into other places and spaces preserves its fascinating mystery. Literature then reveals the ability to transfer one locality into the world of another, generating confusion and excitement, misunderstandings and discoveries, by means of which a creative transnational and translocal literary and cultural community is ceaselessly being built.

The articles in this issue test the usefulnessof the tools of poetics for describing such translocal displacements of literature. On the one hand, they reveal that poetics is deeply imbued with what is national, ethnic, and spatially defined (Edward Balcerzan), on the other hand, they defend a wide spectrum of efforts to capitalize on the transnational energy of literary texts. That is true of the socially engaged work of Dubravka Ugrešić, searching for a form of transnational poetics for the texts she interprets (Maciej Duda), as well as in the travel writing of Andrzej Stasiuk (Sławomir Iwasiów). A conspicuous feature of modernist literature is its translocalenergy, as we see in Franz Kafka (Verita Sriratana), and in writers of the Scandinavian fin de siècle and early 20th century (Marcin Jauksz discussing Lisi’s book). Studies of early modern transnational poetics present a completely different horizon of knowledge, as a comparative exploration of Jan Kochanowski’s poetry written in Latin and Polish shows (Agnieszka Kwiatkowska). For that reason, the problems of translocal poetics can motivate us to redefine such concepts as influence and sources (Ewa Kraskowska), as well as create new terms to describe various related developments, for example transfictionality (Paweł Marciniak). We would be remiss to overlook the relationships between transnational poetics and geopoetics (Elżbieta Rybicka’s book reviewed by Cezary Rosiński). An opportunity arises to reconsider Balcerzan’s remarks about “national poetics” when we confront the history of Polish studies in “autotematyzm,” a concept which both resists and lends itself to translation into the categories of similar terms from abroad (Joanna Wójcik).

There can be no doubt that transnational and translocal poetics form only one of the possible intersections of poetics with contemporary studies of world literature, globalized literature, post-colonial literature, and so on. Perhaps in the end its most precious contribution relates to contemporary thought on spatiality in literature and scholarship on that subject.

Edward Balcerzan, The “Nationality” of Poetics – Some Typological Dilemmas

Verita Sriratana, Transnational Modernism and the Problem of Temporal Spatialisation in Franz Kafka’s “The Great Wall of China”

Agnieszka Kwiatkowska, Bilingualism in the Writings of Jan Kochanowski