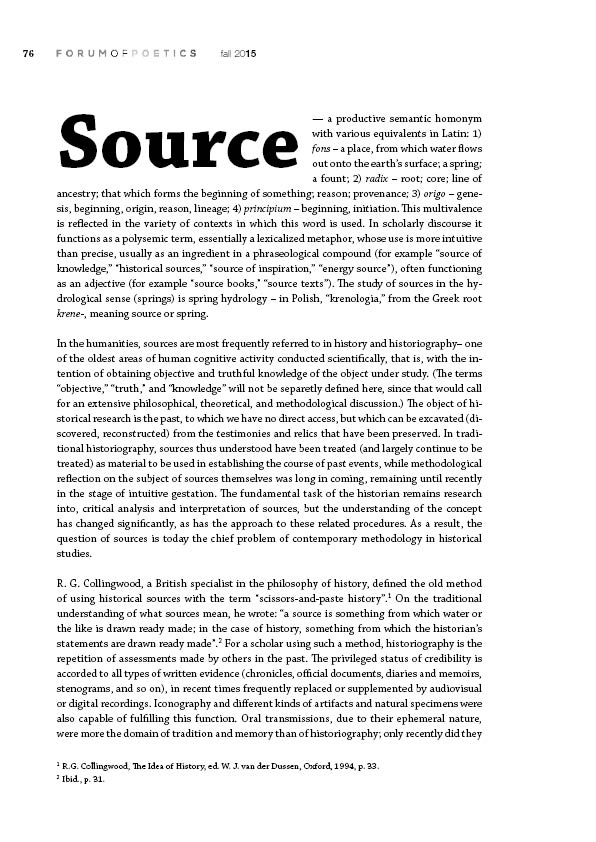 — a productive semantic homonym with various equivalents in Latin: 1) fons – a place, from which water flows out onto the earth’s surface; a spring; a fount; 2) radix – root; core; line of ancestry; that which forms the beginning of something; reason; provenance; 3) origo – genesis, beginning, origin, reason, lineage; 4) principium – beginning, initiation. This multivalence is reflected in the variety of contexts in which this word is used. In scholarly discourse it functions as a polysemic term, essentially a lexicalized metaphor, whose use is more intuitive than precise, usually as an ingredient in a phraseological compound (for example “source of knowledge,” “historical sources,” “source of inspiration,” “energy source”), often functioning as an adjective (for example “source books,” “source texts”). The study of sources in the hydrological sense (springs) is spring hydrology – in Polish, “krenologia,” from the Greek root krene-, meaning source or spring.

In the humanities, sources are most frequently referred to in history and historiography– one of the oldest areas of human cognitive activity conducted scientifically, that is, with the intention of obtaining objective and truthful knowledge of the object under study. (The terms “objective,” “truth,” and “knowledge” will not be separetly defined here, since that would call for an extensive philosophical, theoretical, and methodological discussion.) The object of historical research is the past, to which we have no direct access, but which can be excavated (discovered, reconstructed) from the testimonies and relics that have been preserved. In traditional historiography, sources thus understood have been treated (and largely continue to be treated) as material to be used in establishing the course of past events, while methodological reflection on the subject of sources themselves was long in coming, remaining until recently in the stage of intuitive gestation. The fundamental task of the historian remains research into, critical analysis and interpretation of sources, but the understanding of the concept has changed significantly, as has the approach to these related procedures. As a result, the question of sources is today the chief problem of contemporary methodology in historical studies.

R. G. Collingwood, a British specialist in the philosophy of history, defined the old method of using historical sources with the term “scissors-and-paste history”.[1] On the traditional understanding of what sources mean, he wrote: “a source is something from which water or the like is drawn ready made; in the case of history, something from which the historian’s statements are drawn ready made”.[2] For a scholar using such a method, historiography is the repetition of assessments made by others in the past. The privileged status of credibility is accorded to all types of written evidence (chronicles, official documents, diaries and memoirs, stenograms, and so on), in recent times frequently replaced or supplemented by audiovisual or digital recordings. Iconography and different kinds of artifacts and natural specimens were also capable of fulfilling this function. Oral transmissions, due to their ephemeral nature, were more the domain of tradition and memory than of historiography; only recently did they attain the rank of sources, mainly in the developing category of oral history. Scholarly use of sources is focused above all on their critical analysis, since in K. Bartoszyński’s words, – “the value… of a text as a source lies not in what it communicates, but in the informational resources that can be extracted from it”.[3] The typology of historical sources, their origin, editing, the methodology of their study, and the possible ways of protecting and preserving them are the business of the area within the field of history called source studies.

The paradigm shift in the historiography of sources is connected to the development of a narratological approach to studies of the past and the belief that, as Nietzsche argued in the late 19th century, there are no facts, only interpretations (“[…] gerade Thatsachen gibt es nicht, nur Interpretation”).[4] History is thus an interpretation of the past constructed by the scholar. A point of view currently becoming increasingly widespread among historians postulates that historiography is a form of literature, and consequently the analysis of written historical sources may be approached in a manner analogous to that of literary texts, that is, using the tools of poetics for their interpretation.[5] On the other hand, a literary work can also be treated as a historical source, which calls, however, for the scholar to confine his or her perspective to the text’s referential dimension. In the opinion of J. Topolski the immediate value of literature as historical source is primarily found in literary works’ function as references, documenting (e.g. sociologically) the period in which they were written.[6]

The French thinkers Michel Foucault and Jacques Derrida played key roles in the transformation of how we treat historical sources. The former, in his concept of the “archaeology of knowledge,” drew out the relative, discursive, and non-essentialist character of all materials used as sources, thereby underscoring their function in the construction and legitimation of knowledge. It was under his influence that a critique of sources based on the critical analysis of discourse and the utterance was mounted, in which the tools of rhetoric and poetics figured crucially. Foucault also gave new meaning to the term “archive,” in traditional historiography the place where sources were preserved and worked on. For Foucault an archive is neither the institution, nor the sum of documents from the past that a culture preserves, but a general “system of formation and transformation of utterances”.[7] Only a partial description of such an archive is possible, and it directs the scholar toward “the historical a priori,” that is, toward the “history of things actually said” on a given subject.[8] Foucault’s own works provide examples of such investigations of the past; they include Madness and Civilization: A History of Insanity in the Age of Reason, The Birth of the Clinic: An Archaeology of Medical Perception, Discipline and Punish, and The History of Sexuality: The Will to Knowledge.

Like Foucault, Derrida emphasized the analysis and critique of power structures, especially those hidden within systems of knowledge. The concept of a source is strongly linked with authority and authoritarianism, since traditionally understood historical sources provide the scholar with definitive authority and validity. Derrida tied this problem to his critique of what he called the metaphysics of presence and logocentric thought, typical for the rational foundations of modern Western culture. For him, a source is one of the forms of metaphysical presence (like the concepts of truth, meaing, or causation) that require deconstruction through destabilization. M. P. Markowski has summed up the logical procedure through which this is done in the following words: “The source exists only to that extent that it contains something other than itself. The beginning exists only to that extent that it is followed by something that contradicts it. Both source and beginning thus exist to the extent that they are inscribed in something else”.[9] Derridean deconstruction of the concept of sources is derived from Nietzschean deconstruction of causality, a reversal of the hierarchy in the scheme of cause and effect in which it is not the cause that precedes the effect, but vice versa: the presence of the result creates the cause.[10]

Historical sources are the material foundation of historiography generally and in particular the history of academic disciplines and the arts. For literary historians, studies of sources relate to the sense of a literary work’s artistic specificity and problems of literary communication, and the concept of the source therefore acquires many uses in their discourse besides those discussed above. The act of interpretation, which itself is usually a creative act, represents a particular use of the literary text as a source of meanings and values. Individual methodological orientations mark the center of meaning-production at diverse points (it can be the author, the text, or the reader), as a result of which questions about the limits of interpretation have become one of the most contentious topics in contemporary literary scholarship. In linguistics, the category of the source is linked to etymological studies. The purpose of such studies is to establish a word’s etymon (root word), thus determining the original word or element from which a given word was formed.[11]

The word “source” and its derivatives play an extremely important role in translation studies, and have also undergone a fundamental revision by means of developments in that field. The word is closely linked to the concept of the original and appears in such terms as “source-text,” “source-language,” “source text/language/culture,” bound by a binary opposition to the terms “target text,” “target language’ and “target text/language/culture.” In traditional (philological, linguistic, and structuralist) reflection on the phenomenon of translation, the original holds the status of primary text and constitutes the main point of reference for the translated text, treated as secondary and dependent (“bound,” in Barańczak’s term).[12] In this view, the gauge of the translation’s value is the degree of its equivalency to the original. What is being called the cultural turn in translation studies has led to a revaluation of the opposition original-translation and a focus on the second member of the dyad, with a simultaneous devaluation of the first, similar to the process that took place earlier with regard to deconstruction’s destabilization of the source. The authority of the original as the ultimate source of meanings generated in the translation has been undermined, a development that would appear favorable to the role and position of the translator. Looked at in this way, a translation is treated as an autonomous phenomenon, and the focus of scholarly interest is shifting to the way the new text functions in the target culture and its multifarious social, political, and cultural contexts.[13]

This survey of the career of the word „source” presents various aspects of this versatile, multi-valent concept, and the forms of its use in the humanities, particularly in historiography and translation studies