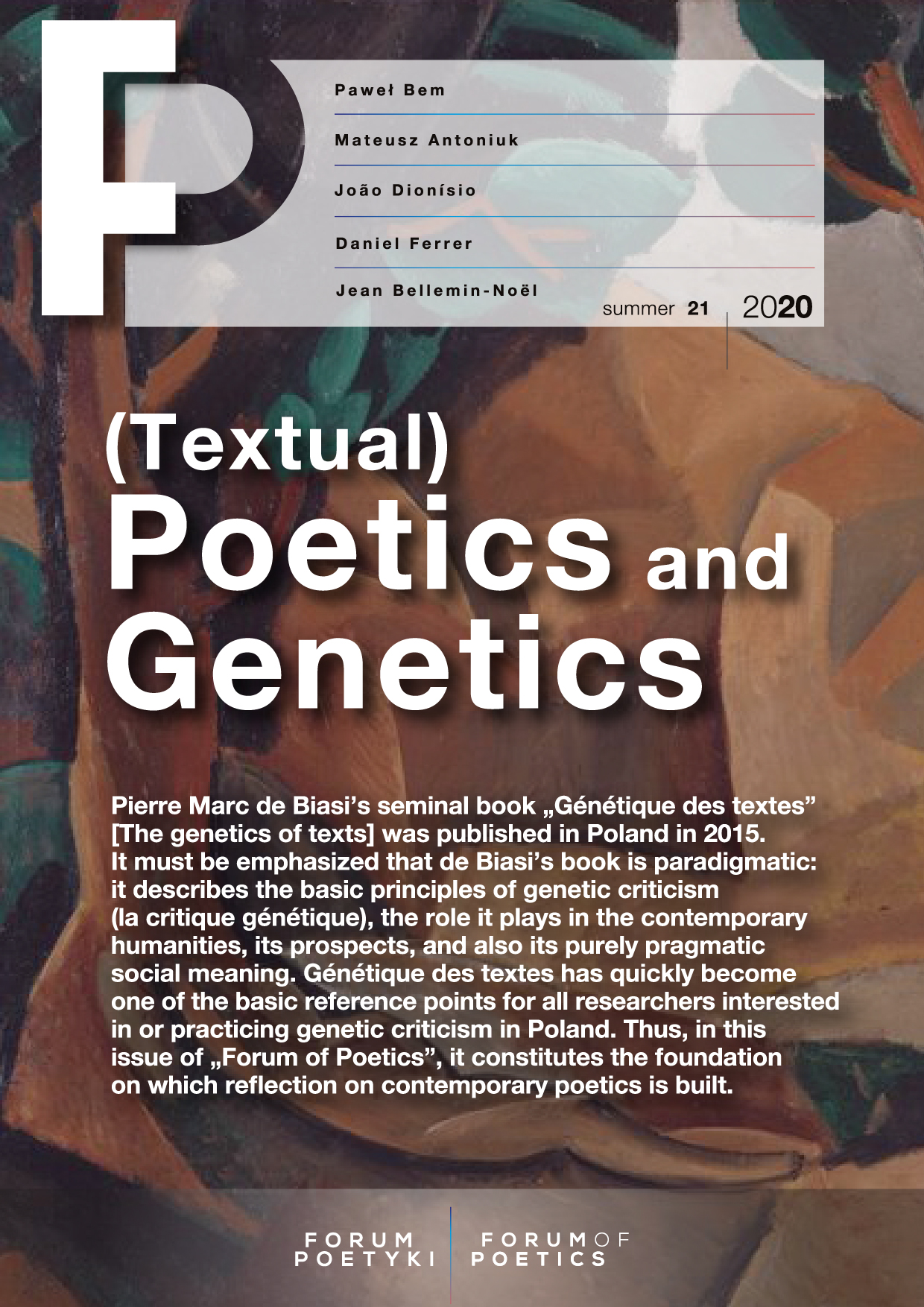 Pierre Marc de Biasi’s seminal book Génétique des textes1 [The genetics of texts] was published in Poland in 2015. It must be emphasized that de Biasi’s book is paradigmatic: it describes the basic principles of genetic criticism (la critique génétique), the role it plays in the contemporary humanities, its prospects, and also its purely pragmatic social meaning. Génétique des textes has quickly become one of the basic reference points for all researchers interested in or practicing genetic criticism in Poland. Thus, in this issue of Forum of Poetics, it constitutes the foundation on which reflection on contemporary poetics is built.

We are particularly interested in the changes that genetic criticism has undergone in recent years in Poland and abroad, the nature of its interactions with other fields of knowledge, and, above all, the question of how genetic criticism shapes and/or may shape, modify, and influence modern poetics. The transactions between genetic criticism and other fields of knowledge should not be construed as one of barter. Indeed, this relation may best be described as an overlap of research fields – a unique form of oscillation or interference. In this issue of Forum of Poetics, this question is discussed by Jean Bellemin-Noël, who defines the fundamental concept of a “pre-text” and combines literary practice with psychoanalysis; Daniel Ferrer, who constructs an original process of genesis based on the philosophical concept of “possible worlds.”

In this case, an overlap of research fields is often associated with the “microanalysis” or “micro-reading” of a given textual fragment (similar to the one proposed by J.P. Richard in his book Microlectures; the smallest textual elements, margins, and details, which nevertheless are meaningful in the context of larger textual units, should be analyzed; it is a detailed reading and the reading of details); a “microscopic view” (similarly to R. Jakobson’s reading of one of Charles Baudelaire’s Spleens; the focus is on sounds, phonemes and the relations between them); or, finally, “micrology” (Aleksander Nawarecki’s concept2). All these terms may be slightly modified and employed in the genetic reading of selected poems, which is both a “micro-reading” and a “microscopic view,” as it focuses on almost invisible and minute details and margins. This micro scale is crucial in genetic criticism: the focus is on the analysis of textual details which are usually magnified, although today we use technology and not a magnifying glass.

Indeed, the “micro-reading” of pre-texts may influence the interpretation of the text. The “micro” scale may give rise to a completely different interpretation, expanding and discovering new semiotic fields of the text. The relations between textual poetics and textual genetics seem to be obvious but they are not: their experiences and practices overlap, which opens up the space of the analyzed text in a unique manner. This, in turn, opens up mis en abyme, ad infinitum, making it difficult to trace the origins of the text. Such vague textual origins, often by necessity described using the conditional (perhaps it could happen that…, or perhaps it is possible that…), are the most fascinating and important subject of genetic analysis. The “micro” scale is present in almost all of the texts in this issue of Forum of Poetics. Formal details and often marginalized aspects of manuscripts are analyzed. When magnified, such details raise a number of interpretative questions. These questions, in turn, lead to surprising discoveries: prevailing opinions are questioned or undermined. Sometimes, they are “annihilated:” genetic criticism, by definition, is anti-mythological. Indeed, it is an anti-mythology. For example, Serge Fauchereau and Lydie Marie Lachenal in their genetic edition of André Breton and Philippe Soupault’s Les champs magnétiques undermined one of the greatest literary myths related to écriture automatique (automatic writing; the words allegedly arise from the Subconscious and are not corrected). As de Biasi says, numerous deleted words which “decorate” the manuscript in Fauchereau and Lachenal’s genetic edition effectively debunk the modernist literary myth of automatic writing.

In genetic criticism, we approach the text as if it were a picture. On the one hand, we are equipped with a set of tools and procedures which help us organize the material we are analyzing. On the other hand, when we examine manuscripts, we always find places that elude explanation, raising complex interpretative questions. They may remain unanswered or be answered only partially, as evidenced by some of the texts in this issue of Forum of Poetics. Each text possesses unique narrative values: each text reveals a textual secret. Old findings give way to new textual discoveries.

In this issue of Forum of Poetics, I refer to the classic French texts of genetic criticism. We publish excerpts from the seminal books of genetic criticism in Polish for the first time. Indeed, we publish excerpts from Jean Bellemin-Noël’s Le Texte et l’Avant-texte. Les brouillons d’un poème de Milosz, which was first published by the Larousse publishing house in 1972, i.e. almost half a century ago. We also publish excerpts from Logiques du brouillon3 (previously published as an article, which is the basis for the translation published in this issue of Forum of Poetics) by outstanding contemporary researcher-specialist in literary genetics Daniel Ferrer. This book should be published in Polish in its entirety, because it is an extraordinary source of methodological and theoretical inspiration. It demonstrates how genetic analysis should be performed, revealing the detailed procedures and, to repeat after Ferrer, “possible worlds” of genetic criticism and the analyzed texts. We invited Polish literary scholars who employ genetic criticism in their works to contribute to this issue of Forum of Poetics: the results are surprising and fascinating. Authors employ different methodological approaches, different ways of analyzing archival materials, as well as highly diverse textual and interpretative practices. I sincerely hope that they will be evaluated and appreciated. To draw on Daniel Ferrer, the texts in this issue of Forum of Poetics may be best summarized in the words of Roland Barthes:

I have a manuscript page in front of me; something which also participates in perception, in intellectual understanding, in association – but also in remembering and enjoying – and something which is called reading is set in motion. What is reading, where am I going, where do I stop? Of course, I can clearly see the textual field; but towards what is my eye drawn? What other space does it accommodate? Does it transgress the page? (but behind the page, there is the table). What fields does reading discover? How is the cosmogony postulated by this simple gaze constructed? A lonely astronaut, I traverse many worlds, I do not stop: the whiteness of the paper, the shape of the signs, the form of the words, the rules of the language, the constraints of the message, the profusion of associated meanings.4

Even if Ferrer is critical of Barthes, in my opinion, he adequately describes the very nature of the articles in this issue of Forum of Poetics. “L’écriture-lecture” [writing-reading], as Barthes observes later in the same passage, expands into infinity and draws man as a whole, both his body and his history, into action that could only be defined as follows: it does not stop anywhere.5 Indeed, Barthes refers to “infinity:” it is a theme that, not always explicitly, connects the texts in this issue of Forum of Poetics.

When I was preparing this issue, I realized how many researchers in Poland employ genetic criticism in their works and how much and in what extraordinary way genetic criticism has developed in recent years. Today, researchers from the Institute of Literary Research of the Polish Academy of Sciences, the Jagiellonian University, and many other academic centers in Poland enter into an open dialogue with international researchers-specialists in literary genetics, presenting their original methodological and interpretative proposals.

As an editor of this issue of Forum Poetics, I want to ask: Well, shouldn’t we finally establish a Polish ITEM, a real center that would bring together many generations of Polish editors and researchers in literary genetics? Such a center would not only define the framework for editorial and genetic research, but also collect and organize documents, prepare model editions, and make them available to researchers (and readers) via the new media. As always, finances may be a concern, but they should not undermine this project, because it is a matter of the utmost importance, closely related to Polish national heritage. I do not think that we need any further justifications: researchers in Polish culture believe that such a center should be established, and decision-makers should feel the same way. Considering the remarkable progress in the field of editing and genetic criticism in Poland, it seems to me that this project should be supported and implemented. I sincerely hope that it will be.

Paweł Bem, The Tone of a Manuscript. Literature – Edition – Life

Mateusz Antoniuk, Poetics, genetics, work. (On the art of rhyming)

João Dionísio, Variation and game rules in The Steps to Parnassus

Michalina Kmiecik, Engrams of the Body: The Poetics of Pain Notes in Aleksander Wat’s Archive

Dariusz Pawelec, Pomarańcze na drutach by Witold Wirpsza. Problems with understanding a prose experiment in the light of a pre-text