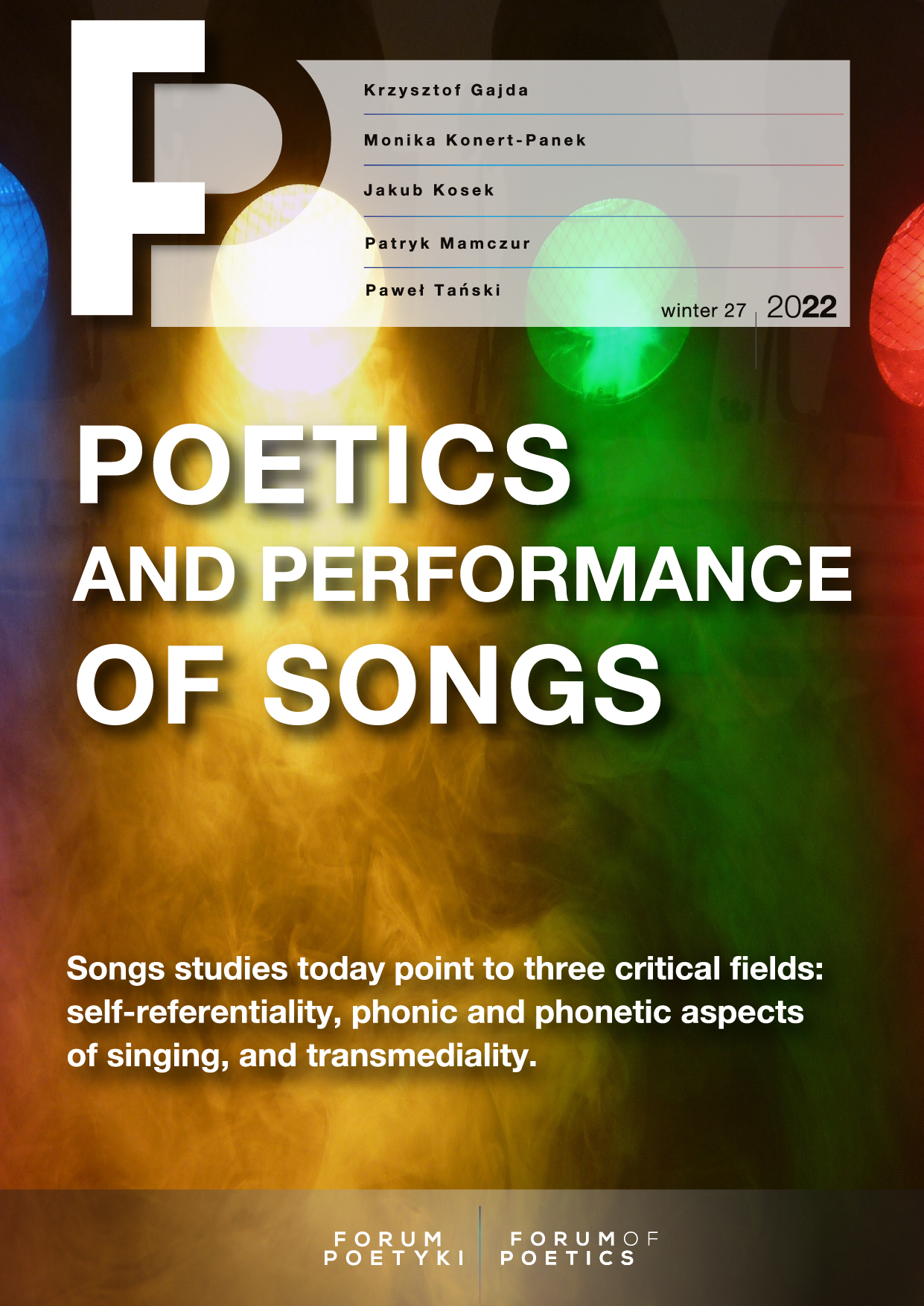 What lies at the heart of this issue of Forum of Poetics and at the same time, what we believe may inspire further research into the question at hand is a reflection on the known and the unknown in the poetics of songs. Despite simple semantics, these two words, which refer to the non-new and the unexplored, create an intriguing, as it seems to us, network of relations, transversals, and connections that is worth discussing in further detail.

The adopted research perspective is announced in the headline, the title: poetics and performances of songs. It is both rooted in existing scholarly discourse and opens new horizons; it refers to tradition, but it also sounds modern and brings with it its own connotations. Thus, it shows, as we believe, the axiological vector of an expressive metaphor, which we hope, may conceptually organize in the near and perhaps also in the distant future, the philological and cultural background of the concept in question and, understandably, its further inevitable modifications. This topical issue is therefore characterized by an open drive to initiate a dialogue, to review recent concepts and proposals; it is also saturated with experiental energy, which helps place earlier impulses in a vast, diverse, and complex configuration.

Respectively, we must acknowledge the indisputable evolution of the methodology used in literary, linguistic, musicological, media, ethnological, philosophical and cultural studies. Interdisciplinary dialogue ensures that the horizon of shared interests is inspiring and vide, allowing one to investigate the issue at hand in greater detail and revisit well-known verbal and musical texts. It also allows one to analyze in greater depth seemingly familiar, intuitive, repetitive, and closed research fields.

The final plane for reflection are innovations, the sources of which may be found in the new technologies, which are after all part and parcel of the field in question, with the development of the Internet at the forefront. These new technologies mean that music is more easily available than ever, facilitating the interpretation and study of such inherently multimodal and multifaceted cultural texts as songs.

The articles in this issue of Forum of Poetics point to three critical fields: self-referentiality, phonic and phonetic aspects of singing, and transmediality. Patryk Mamczur focuses on Polish big-beat music from the 1960s and early 1970s. He analyzes the lyrics of selected songs from that period and emphasizes their self-referentiality, discussing how big-beat performers described themselves, their fans, and the phenomenon of teenage music in their songs. Mamczur refers to songs by popular bands as well as by less known local groups. His analysis is placed in a broader social and political context, as he reads the respective lyrics in and through the contemporary press, politics, and cultural policies. He shows that the self-referentiality present in the lyrics of big-beat songs proves the considerable self-awareness of Polish artists in the period in question.

Krzysztof Gajda writes about Pablopavo, an artist for whom mise en abyme is one of the most important means of expression. A vital perspective in literary studies, mise en abyme has rarely (or hardly ever) been considered an important element of song lyrics. Gajda discusses numerous examples of mise en abyme in the works of the Warsaw songwriter, creating fascinating paraliterary constructions. Pablopavo goes beyond the limits of the song as a genre, pointing to its literary nature. Mise en abyme helps build rapport with the addressee, who is no longer purely focused on entertainment. Distance to form, irony and humor ensure the authenticity of the message, focusing on the very process of communication, based primarily on language.

Paweł Tański attempts to interpret the performative aspects of Nick Cave’s singing and song lyrics written in collaboration with the guitarist Rowland Stuart Howard (1959–2009), Mick Harvey, Vincent Eugene Craddock (also known as Gene Vincent), and William Douchette (also known as Bill Davis). Tański focuses specifically on the album The Birthday Party (1980), which Nick Cave recorded together with his band The Birthday Party. Tański’s analysis, representative of rock song lyrics studies, is a receptive trace and a reflection on the beginnings of this outstanding songwriter, rock musician, and singer’s career. The author argues that the Australian singer, beginning with the first recordings with the band The Boys Next Door (Door, Door from 1979), writes about love, pain, and loneliness, and above all, each new album by the author of Into My Arms records the experience of longing. The Birthday Party, therefore, is no different; it expresses regret and sadness – the feelings of the author/singer, the narrating/singing “I,” the lyrical and the musical persona or, in other words, the singing and performing subject. Cave’s singing is a metaphor for the habitus of punk song miniatures, which are lyrical and vocal expressions of rebellion, filled with irony, while the main principle of the poetics of these works is the grotesque.

Monika Konert-Panek analyzes the functioning of selected English phonetic features and inspirations related to them in Polish punk rock and interprets the results in a broader stylistic and sociolinguistic context. She argues that pronunciation in singing can be connected to expressing specific, potentially evolving, social or stylistic meanings, and in the case of Anglophone Polish punk rock these meanings depend on trends within the genre. In most analyzed cases, English pronunciation displays a lot of interference from Polish and little to no stylization, with few examples of features of Cockney, which is associated with classic punk rock.

Jakub Kosek discusses Till Lindemann’s multimedia and transmedia solo works. Functioning within and across ideological and subjective discourses, the songs of the German singer and songwriter are narratives that are often developed creatively across various media platforms, including cover art, music videos, or even short films. The releases of new albums and songs are often accompanied by creative promotional campaigns. Songs are therefore analyzed in the article as transmedial narratives (M.-L. Ryan) subject to the cultural logic of media convergence (H. Jenkins) and circulating across various musical scenes (K. Kahn-Harris).

Aleksandra Reimann-Czajkowska focuses on intermediality, especially on relations between music and literature, connected by “music in lyrical circumstances” (Iwona Puchalska) in poetry. Her article is an attempt at listening to an intertextual dialogue between two poems, where listening to music is the most important experience (Goldberg Variations by J.S. Bach in Barańczak’s Kontrapunkt [Counterpoint], and a Gregorian chant in Zagajewski’s poem). In the two poems, logos and melos are inseparable, permeating each other, organizing the fictional space of their respective texts, and serving as a starting point for existential considerations. Listening thus brings a new sort of a sensual reception (and organization) of reality, in which experiencing opposites can lead to a desired harmony.

Marek Hendrykowski attempts to functionally reconstruct the views expressed by Marshall McLuhan in his works, both from a epistemological and a methodological perspective. The author argues that at the core of McLuhan’s theory, often regarded as a manifestation of “conservative” views, lies an individual form of cognitive and methodological skepticism. The skeptical attitude of the author of The Gutenberg Galaxy and Understanding media means that his considerations, despite that fact that they date back to the 1960s, are not outdated and still attract great interest from contemporary media scholars.

All these discourses give rise to a humanistic laboratory that this issue of Forum of Poetics devoted to “The poetics and performance of songs” is. The articles in this issue illuminate three cultural spheres of verbal and musical texts. Against this critical background, human choices connected with the functioning in contemporary audial culture become visible. They concern individual efforts to construct one’s private audiosphere in a world in which technology actively promotes indirect listening practices.

Patryk Mamczur, “There are already three hundred thousand of us:” A self-referential look at fans and performers in Polish big-beat songs from the 1960s and early 1970s

Aleksandra Reimann-Czajkowska, On acousmatism in poetry. Listening to the world in Szybki wiersz by Adam Zagajewski and Kontrapunkt by Stanisław Barańczak