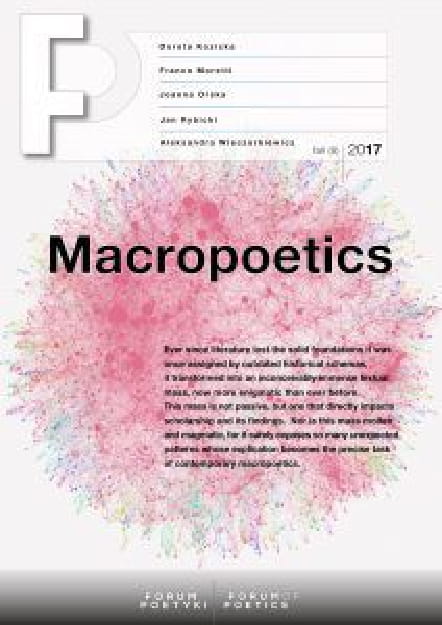 Until rather recently, scholarship reckoning with the history of literary forms has been on the retreat. Few disciples have surfaced to carry on the long-dormant work of literary genealogists as well as structuralists’ more recent histories of literature as a set of artistic forms. The ongoing crisis in comparative literary history and the widespread consensus on the need to abandon linear narratives in literary history have yielded implications that would be more at home in cultural studies. For in cultural studies, mere artistic forms have little relevance in their own right, and dense descriptions of non-literary fifteenth-century legal records have been just as intellectually fruitful as the study of literature.

This by no means suggests that, at the end of the day, it is possible to approach single, remarkable works through the prism of micropoetics without situating them against a vision of the whole context to which that work strives to or does in fact belong: the context that work molded, or by which the work was molded in turn. Today, it seems to be the case that the claims already introduced by formal literary histories remain quite useful, and often inspiring. Yet beyond this, the undoubtedly active process of devising new comprehensive, collective, or generalising concepts persists, though it is rarely scrutinised. Naturally, assertions of this kind tend to be flagged with the caveat that they are but hypothetical claims, entirely impervious to the lure of all totalising theoretical languages. The digital humanities have lent macropoetics a renewed impetus, making data accessible in vast volumes and leading us to diverse, often modest, but indisputable conclusions for poetic, genealogic, and related areas of research.

Contemporary macropoetics therefore hardly seems to claim that literature, finally freed from the corset of obsolete scholarship, has now become a simple set of texts arranged into arbitrary subgroups by the philologist-constructivist. To the contrary, macropoetics today recalls the state of affairs in contemporary economics, where we anxiously await the findings  of new macroeconomic analyses that may well contain shocking and predictable results side by side. In the case of macropoetics, our work is rather similar: literary analysis often turns up conclusions that nobody could have foreseen. We might even make the claim that ever since literature lost the solid foundations it was once assigned by outdated historical schemas, it transformed into an inconceivably immense textual mass, now more enigmatic than ever before. This mass is not passive, but one that directly impacts scholarship and its findings. Nor is this mass molten and magmatic, for it surely exposes so many unexpected patterns whose explication becomes the precise task of contemporary macropoetics.

An enormous challenge for poetics is posed, for instance, by the stylometric analyses that allowed Jan Rybicki to visually represent on one page discrete textual masses that represent the entirety of historical and contemporary Polish literature. What are the new stylistic macroforms of Polish writing, and how can we interpret their mutual connections that so often do not square with earlier concepts? Similarly galvanising are the ideas of Franco Moretti, who represents textual systems as literary forms by way of “maps” and “trees” (Borys Szumański discusses his book on the subject). Moretti’s article from the Stanford Literary Lab Pamphlets, whose translation appears in this issue, shows us what happens when poetic concepts are submitted to digital quantitative analysis. Visions for new comprehensive scales that might reflect such a staggering mass of literary texts — now emancipated from the rubrics of outdated literary history — can be beautifully traced within feminist studies (Arleta Galant), translation studies (Aleksandra Wieczorkiewicz) and new research on literary generations (Angelika Trzcińska). This issue includes interventional approaches to a few more modest textual groups, perceived not as movements, but as constellations (Dorota Kozicka, Katarzyna Trzeciak). Still other texts transform the way we see disparate literary periods, such as the literature of World War II – so significant for Polish literature (Sławomir Buryła) and literature of the socialist period (Jan Galant). The huge rise in the volume of texts we can grasp within our scholarship and the equally extreme rise in the critical methodologies at our disposal allow us to see fragments of textual mass and their internal structures in radically new light. Textual categories mapped out long ago now leave much to be discussed, as this issue’s contributors have demonstrated in the case of theories of free verse (Joanna Orska) and the literary cycle (Patrycja Malicka).

The Greek prefix “macro” indicates both severe magnitude and spectacular length. In this spirit, contemporary macropoetics generates new assessments of the vast textual mass, turning up not only new forms of self-regulation, but new ways to expand this mass as well. There is tremendous value in bringing more and more scrutiny to the work of tracing the contemporary contributions of macropoetics.

Jan Rybicki, A Second Glance at a Stylometric Map of Polish Literature

Arleta Galant, On Waves, Lands and Margins. Metaphors and the Possibilities for a Feminist History of Literature

Franco Moretii, “Operationalizing”: Or, the Function of Measurement in Literary Theory

Joanna Orska, How Does Free Verse “Work”? On the Syntax of the Avant Garde

Patrycja Malicka, Research On The Literary Cycle In Poland

Angelika Trzcińska, A Generation (Not So) Passed?