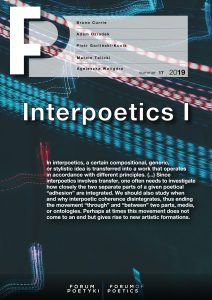 A decade ago, this issue of Forum of Poetics would probably have been titled simply “intertextual poetics.” However, the latest studies demonstrate that relations between texts can no longer be discussed in terms of broadly defined intertextual connections. Today, the question of how to determine the ontological status of a literary work is indeed a complex one – a given text can be textual, vocal, or otherwise “material;” it can be somewhat traditional or it can take the form of an algorithm, as is the case with electronic or digital literature. This alone means that the relationships which hold between broadly defined literary texts should be studied and interpreted in a new way – in the perspective of interpoetics.

Published in 2016, Bruno Currie’s Homer’s Allusive Art, an excerpt from which is included in this issue of Forum of Poetics, demonstrates that the Iliad includes references to other works in a manner similar to the model found in oral literature. In this respect, Homer’s epic emerges as a work created at the intersection of two different stages of literature, oral and written. It means that the connections between the Iliad and other works should be classified as not only intertextual but also, in some cases, interoral. Indeed, ingeniously understood interpoetics appears even in the oldest texts in the traditional European literary canon.

In interpoetics, a certain compositional, generic, or stylistic idea is transferred into a work that operates in accordance with different principles. On the one hand, some questions which relate to poetics, such as the question of coherence, should be posed anew. Indeed, certain structural integrals only become visible from a broader perspective when elements separated by interpoetic “cut” become a new “adhesion.” On the other hand, since interpoetics involves transfer, one often needs to investigate how closely the two separate parts of a given poetical “adhesion” are integrated. Respectively, we should also study when and why interpoetic coherence disintegrates, thus ending the movement “through” and “between” two parts, media, or ontologies. Perhaps at times this movement does not come to an end but gives rise to new artistic formations.

Poetics is not only aware of its interpoetic traditions but it is also confronted with numerous transitions which are characteristic for various contemporary turns, breaks, unexpected connections, and unpredictable conceptual transfers. There are so many questions to be answered and so many ways to look at this phenomenon that we have decided to devote two issues of Forum of Poetics to interpoetics, focusing on its slightly different aspects. In this issue, we will focus on, among others, genetic criticism, as discussed by Jean Bellemin-Noël and Pierre-Marc de Biasi. Drawing on Bellemin-Noël and de Biasi, Adam Dziadek discusses the poetical relations between Aleksander Wat’s manuscripts and printed poems. Barbara Englender engages with an even broader spectrum of interpoetic problems. She discusses Tomasz Różycki’s poems in the innovative context of “photo-graphemicality,” exploring novel connections between photography and poetry. Izabela Sobczak analyzes the unusual relationship between the canon of modernist literature and Alison Bechdel’s famous comic book Fun Home, which, in turn, allows her to discuss the fascinating problem of materiality of intertextuality. In turn, Agnieszka Waligóra analyzes Andrzej Sosnowski’s poem, which may be read as a translation and an adaptation of Frank O’Hara’s text. Marcin Telicki tracks the development of a certain compositional concept, beginning with an Instagram post and ending with Anna Świrszczyńska’s poem. Finally, Piotr Gorliński-Kucik addresses the provocative visions of Jacek Dukaj, who in his last essay Po piśmie has announced the end of writing (and not just literature), discussing a new communication paradigm inspired by new media.

The final example proves that renowned contemporary artists are very much interested in broadly defined interpoetic phenomena, which, at the same time, provide us with a new perspective on the entire history of written literature. Perhaps we are not witnessing the end of written literature, as Dukaj would have it, but it is thanks to interpoetics that literature opens up and develops in a new way.

Adam Dziadek, Avant-texts and Intertextual Relations (In the Context of Genetic Criticism)

Izabela Sobczak, The Materiality of Intertextuality: the Figure of the Shadow in Alison Bechdel’s Fun Home

Barbara Englender, „Are You Affected by Time?”. The Photo-graphemicality of a Text on the Example of Tomasz Różycki’s Las tropikalny

Marcin Telicki, From a Look in the Mirror (Anna Świrszczyńska – Grzegorz Uzdański – an Insta Lie

Agnieszka Waligóra, Poets, Affects and Common Places: In Memory of My Feelings Frank O’Hara and Cover Andrzej Sosnowski from the Perspective of Mise en Abyme