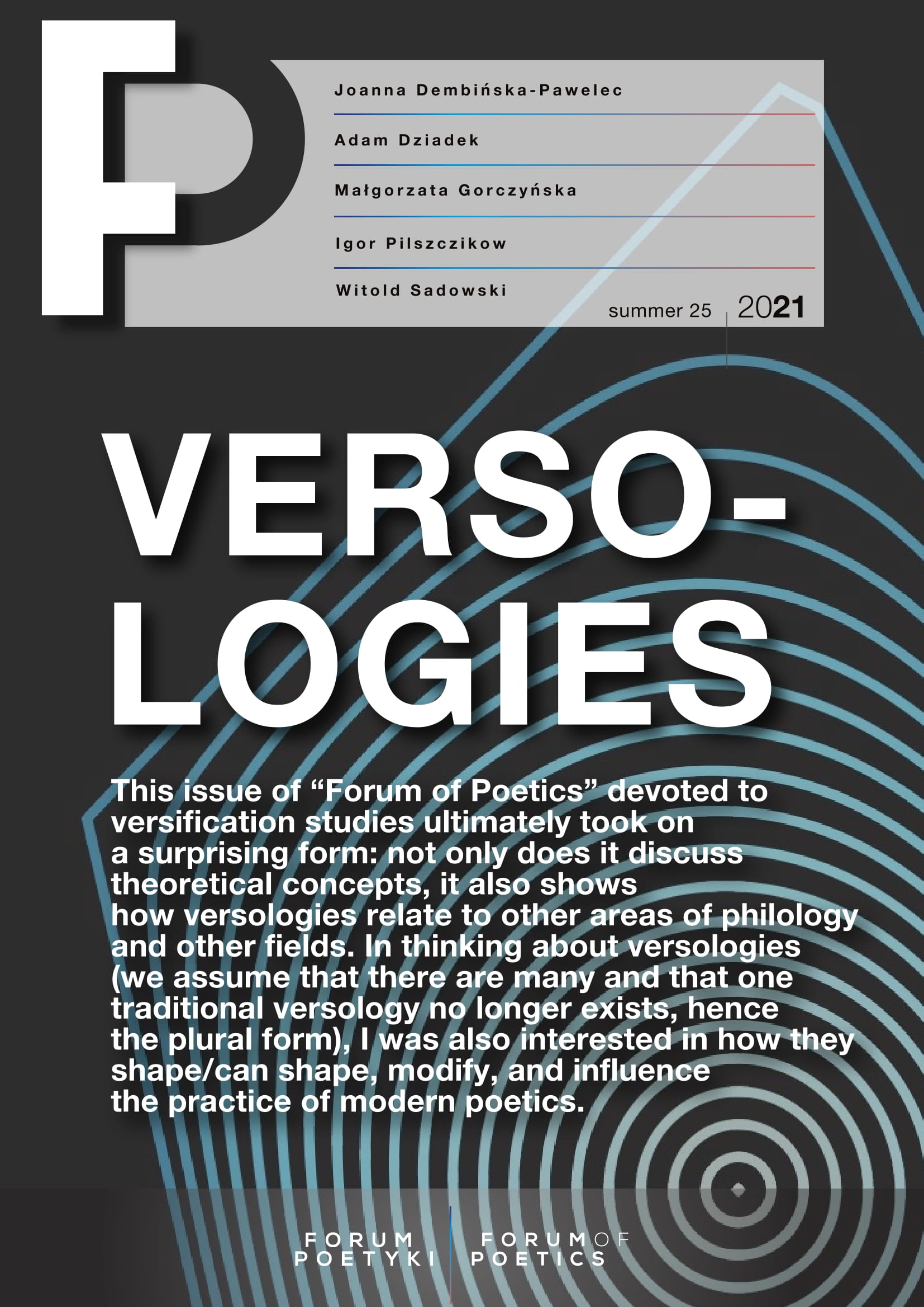 In September 2001, at the 30th Literary Studies and Theory Conference in Krasiczyn, as the Twin Towers were collapsing in New York, Janusz Sławiński was answering a question asked by one of the panelists. The question was: “What is left of structuralism?” Sławiński’s answer was unequivocal: versology. I have never forgotten his answer, and I often return to it. Indeed, I thought that we should refer to Sławiński’s claim in this issue of Forum of Poetics, twenty years after that conference, and carefully and critically examine the Polish tradition of versification studies but also ask about contemporary versology and its most recent accomplishments, tracing the changes that have taken place in recent years and the various trajectories of development in the field. In this issue of Forum of Poetics, versology is first examined from a theoretical perspective. In Free verse poem as a graphic text – in translation: Reverdy and Pound, Witold Sadowski expands on the questions he examined in his earlier works, this time looking at translated works. Wojciech Pietras addresses the fascinating question of the “grey area” between free verse poem and prose (Ambiguous free verse/prose forms in versification studies: An attempt at diagnosis). In Enjambment and versification (a side note to works by Giorgio Agamben and Adam Kulawik), Arkadiusz Sylwester Mastalski traces the various recent versological complications involving enjambment. In turn, Iga Skrzypczak presents an original and very interesting reflection on versological silence. Respectively, in the “theoretical section” of this issue of Forum of Poetics, Igor Pilshchikov’s very informative text, translated from Russian, The Concepts of “Verse,” “Meter,” and “Rhythm” in Twentieth-Century Russian Verse Studies, provides insight into the history of key versological concepts. In the “practices” section, we present analytical texts which discuss how various theoretical tools work.

This issue of Forum of Poetics devoted to versification studies ultimately took on a surprising form: not only does it discuss theoretical concepts, it also shows how versologies relate to other areas of philology and other fields. In thinking about versologies (we assume that there are many and that one traditional versology no longer exists, hence the plural form), I was also interested in how they shape/can shape, modify, and influence the practice of modern poetics. Apart from these problems, the field of practical versological analysis has also been opened up. It was also particularly important to me to show how contemporary versologies influence the interpretation of literary texts, how they can shape them and contribute to discovering their meanings. The texts published in this issue of Forum of Poetics raise such questions. Perhaps they do not resolve them definitively, but they may be regarded a starting point for further versological reflection, which will certainly be developed. In my reflection on versologies, I always refer to Henri Meschonnic’s Critique du rythme and, in particular, to the following words: “la métrique est la théorie du rythme des imbéciles” [meter is the theory of rhythm for idiots]. This is what happens when versologies are reduced to mere sterile metric. In this issue of Forum of Poetics, of course, there is not a single text which adopts such a reductive perspective. On the contrary, all texts open versological perspectives wide, as regards both theory and practice. I treat this issue as a special foundation for further versological research, which, as we can see, continues to grow and develop, but always silently and on the margins of the great ideas in the humanities. Perhaps it must be so, because such studies usually concern the microsphere; they are micrologies, microscopies which, however, sometimes allow us to extract from literary texts a unique and new light of meaning.

Witold Sadowski, Free verse as a graphic text – in translation: Reverdy and Pound

Arkadiusz Sylwester Mastalski, Enjambment and versification (a side note to works by Giorgio Agamben and Adam Kulawik)

Adam Dziadek, Slave to the rhythm? The many different definitions of rhythm

Igor Pilshchikov, The Concepts of “Verse”, “Meter” and “Rhythm” in Russian Verse Theory

Małgorzata Gorczyńska, To describe fire: On the benefits of H.U. Gumbrecht’s project of non-hermeneutic verse studies