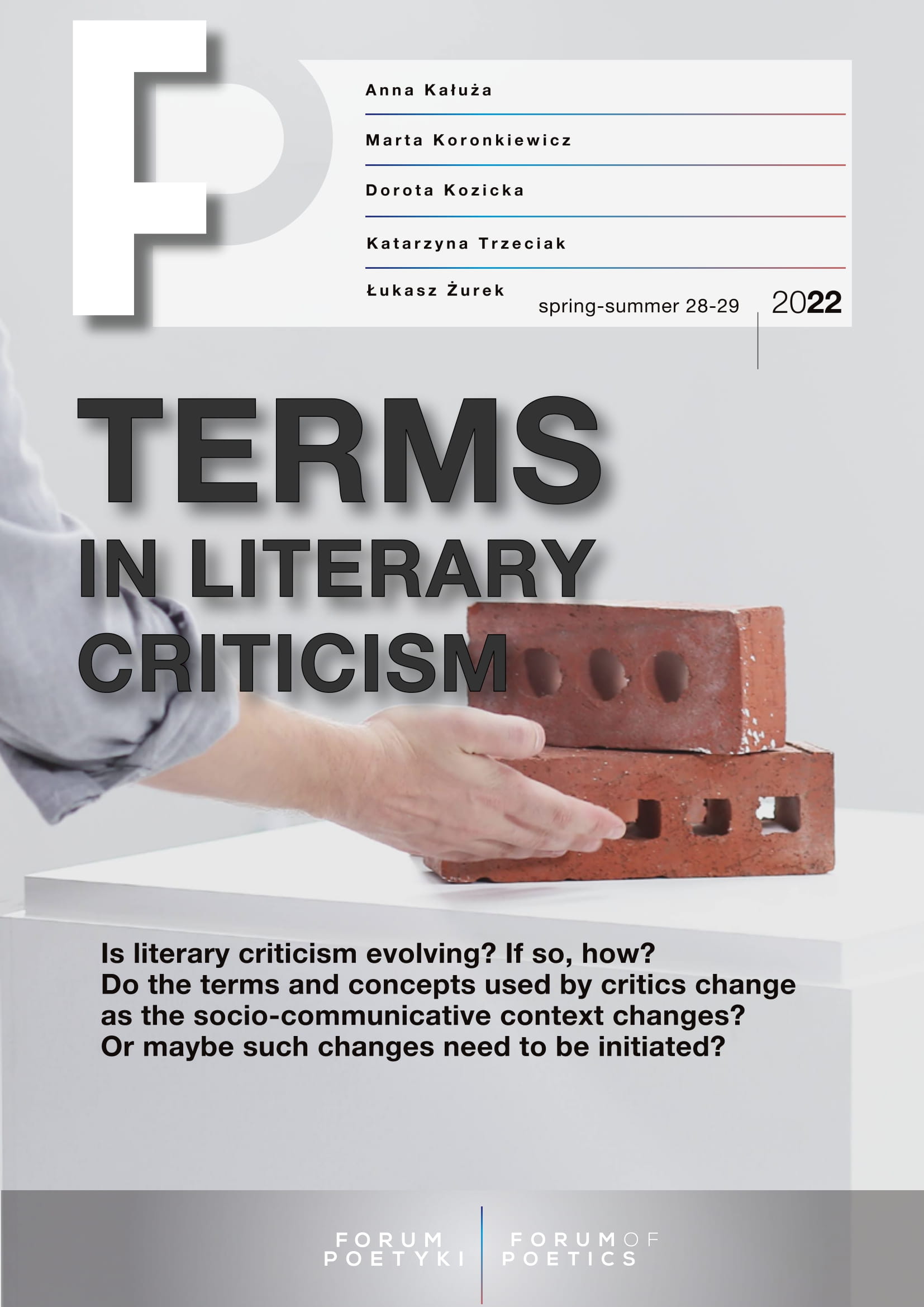 In its traditional understanding, literary criticism is often accused of being outdated, hermetic, incompatible with reality, and elitist. Trying to find itself in the new space of understanding and interpreting artistic forms – both in its social and communicative understanding – literary criticism needs to replace or update its tools, i.e., terms and concepts, if it wants to remain valid. Writing about the functions of criticism, Janusz Sławiński opted for a literary-centric model, useful in discussing autotelic problems of a literary work. Do academic, journalistic, or, for that matter, fan communities still employ a similar model of interpretation, despite the declared need to change the rules of literary criticism? Do contemporary literary agendas and, at times, vague critical programs and evaluation criteria still rely on the established literary narrative? Many critical concepts aimed at organizing a literary scene or field come from the history of literature which still “thinks” and “operates” in terms reminiscent of the second half of the 19th century and the first half of the 20th century.

Is literary criticism evolving? If so, how? Do the terms and concepts used by critics change as the socio-communicative context changes? Or maybe such changes need to be initiated? Literary criticism tends to adapt concepts from the history of literature and literature studies, e.g., from poetics or literary theory, and from other disciplines, e.g., philosophy, sociology, anthropology, art history, and even science, on an ad hoc basis. Sometimes the changes are justified and motivated by the desire to update critical tools, and sometimes they are simply dictated by trends. If the latter is true, they fail to transform the essence of critical discourse, which continues to function as a set of, at times, anachronistic ideas and beliefs, connected with the canon and the history of Polish literature.

Another issue is the marginalization of professional literary criticism in Poland, first identified in the early years of the systemic transformation. It is connected with marketization and the new network model of communication – its digitization and democratization – and the “popularization” of the discourse on culture. These developments went hand in hand with the emerging new contexts of critical reception, increasingly dominated by self-serving and opportunistic authors and critics who show little regard for critical ethics and little interest in the real value of literature.

Critical debate in Poland also calls for – perhaps more than ever – reflection on how literary criticism has viewed class society over the years and the changes this vision has underwent. Reintroducing, or indeed reclaiming, the category of class into literary criticism affects the way in which we view the process of communication in critical texts. What aspects of the language of class has been preserved in criticism and what aspects appear to be (irretrievably?) lost? Also, we need to define the place from which critics speak today, i.e., define the social goals and functions of their texts

Such a metacritical discussion, which also helped map the current state of literary criticism, led to the organization of an academic conference in Karpacz in November 2021. The conference was co-organized by three academic centers: the Laboratory of Contemporary Critical Forms at the University of Wrocław, the Section of Critical Questions at the Jagiellonian University and “Śląskie Studia Polonistyczne” [The Silesian Journal of Polish Studies] published at the University of Silesia. The articles published in this issue of “Forum of Poetics” were inspired by this conference. Examining terms and concepts in literary criticism, we were, of course, aware that they were often rooted in various disciplines, within which their meaning and function were carefully defined. However, we were primarily interested in the ways in which different categories are being adapted by literary criticism and in the interests they serve.

For the purposes of our studies, we distinguished the following groups of concepts of interest to us:

Evaluative concepts such as “originality,” “masterpiece,” “canon,” “avant-garde,” and “readerly pleasure” help us define the characteristics of a literary work and are important in the process of its evaluation. Depending on the context, they may concern the theme, the main assumptions of the work, its place in history, its formal or aesthetic qualities, or its use of generic/formulaic patterns. These concepts refer to the history of literature and literature studies, as well as to the market reality. Analytical concepts – “commodity,” “mainstream,” “class,” “identity,” and others – originally have clearly defined, sometimes even technical, meanings; they are usually used to talk about the relationship between literature and the “real” world. Organizing concepts are useful tools for structuring the literary field, allowing us to discuss given concepts in a wider context. Sometimes, however, they are “hollow concepts;” they are used to legitimize ad hoc judgments. In our reflection on how ordering concepts, which are adapted both from the history of literature and literature studies and from sociology, function in contemporary literary criticism, we wanted to examine why categories such as “generation,” “caesura,” “romanticism,” “classicism” and the like are used in critical texts. How and why are they being redefined?

Concepts related to critical postulates are categories used to formulate and articulate artistic agendas (such as “the autonomy of art”) and categories used by critics to directly express their commitments (writing “programs” and “manifestos”). Such critical texts use numerous slogans and interpretive metaphors, which help one summarize and organize the argument or locate new critical voices against the background of earlier texts and social questions. Anthropological, sociological, cultural, and economic terms used as metaphors, such as “authenticity,” “everyday life,” “privacy,” “experience,” “violence” or “truth,” are not necessarily interpretative “tools” but function as mental and rhetorical abbreviations that critics willingly use to express their observations and intuitions in a more precise manner.

Undoubtedly, some philologists still resort to a category of “basic” concepts in literary criticism. However, do classic poetological and theoretical literary tools, such as, for example, structuralist concepts, still correspond to the state of contemporary literature? How do specialist categories, such as “subject,” “lyrical context,” “intertextuality” and others, function today? How do concepts such as “Anthropocene” and “dialectics” infiltrate literary criticism and how do they change in the process? The relationship between the old and the new languages of academic analysis – after all the actual and the supposed “turns” – and the praxis of literary criticism thus seems particularly interesting.

Even this survey look at the categories used in critical discourse today, more or less successfully, demonstrates how complex the discussion about the communicative situation in which literary criticism finds itself today is. While the articles in this issue develop the important section of “Forum of Poetics,” which “The Dictionary of Poetology” has been from the very first issue, they do not touch upon all possible critical contexts important in the process of revising terms and concepts in literary criticism. Due to the nature of the ongoing debate and its intergenerational character, individual voices seem to complement and resonate with one other, and at the same time show the changes that have taken place in the past thirty years.

Łukasz Żurek, The Concept of a Commodity in Polish Literary Criticism After 1989

Anna Kałuża, How Are Evaluative Notions Created? On the Example of a Dispute over Louise Glück’s Poetry

Marta Koronkiewicz, What Does Your Subject Do? On the Contradictory History of the Lyrical Subject

Sonia Nowacka, Romanticism as a “Travelling” Notion of Literary Criticism. Discourse about Poetry after 1956

Paweł Kaczmarski, The Classless Left. On a Certain Tradition of Politically Engaged Criticism from the Turn of the Century

Tomasz Mizerkiewicz, Justifying Tenderness – the History and Modernity of a Literary-Critical Concept

Karol Poręba, No Critique. The Pleasure of Reading and Literary Criticism in Poland