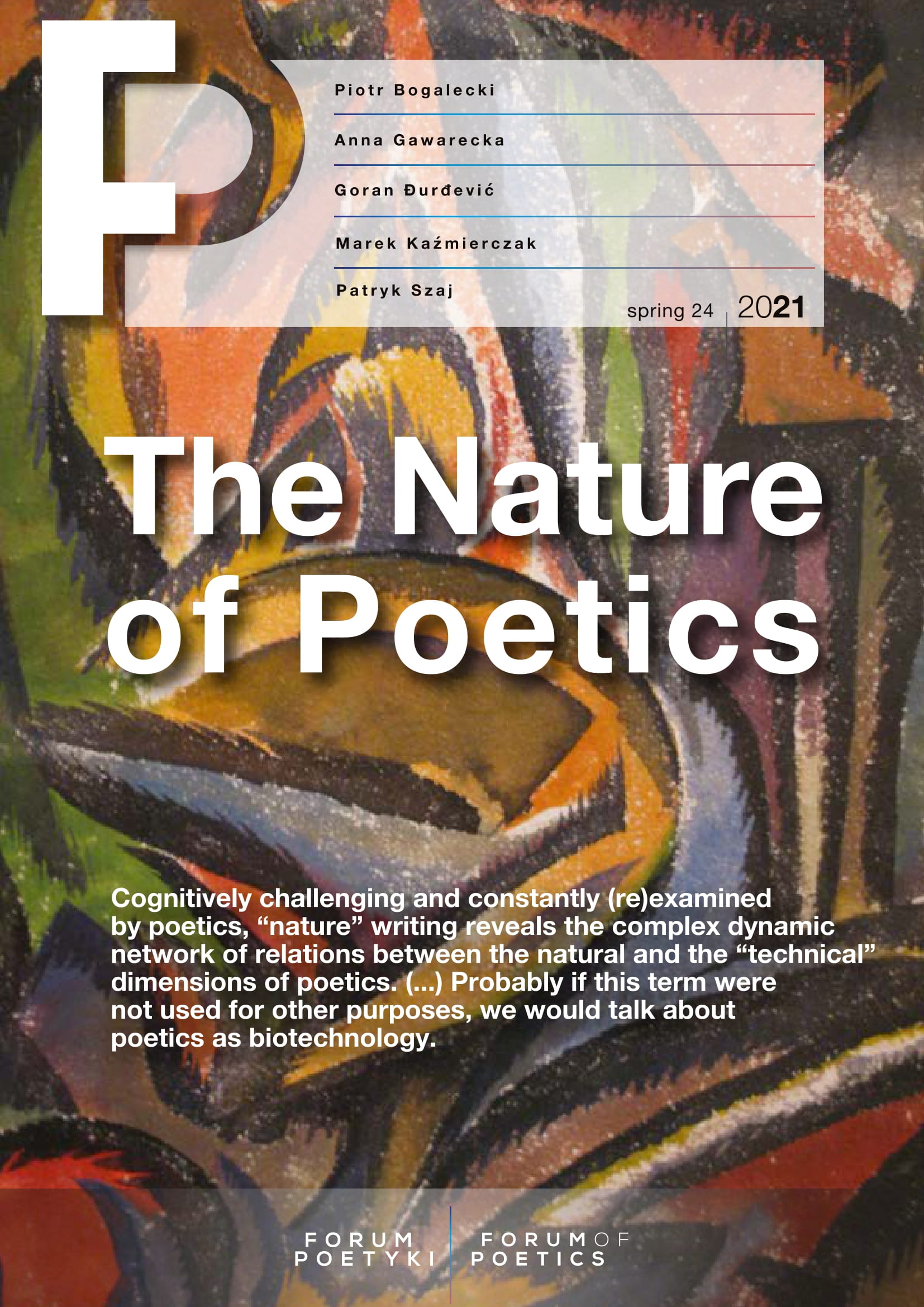 Literary texts which address and engage with the subject of nature, documenting the experience of nature and questioning the boundary between the human and the more-than-human, seem to touch upon poetics not only as far as the so-called “eco-poetics” is concerned, but also in general. Cognitively challenging and constantly (re)examined by poetics, “nature” writing reveals the complex dynamic network of relations between the natural and the “technical” dimensions of poetics. Poetics develops in the midst of the interactions between the human and the more-than-human, and the two constantly exchange agencies. Only at certain times in its history could it appear to be the domain of reason, and these approaches were repeatedly undermined, showing dependencies, analogies, and unnoticed genealogies leading to natural sources. Probably if this term were not used for other purposes, we would talk about poetics as biotechnology.

The complex relation between the natural and the technical can be observed today in their many historical forms. Marcin Leszczyński shows how ancient and modern astronomical theories inspired Adam Mickiewicz’s and Juliusz Słowacki’s Romantic poetry. Joanna Soćko writes about the connections between human immanence and the opposing transcendence which ultimately culminate in “dirty” transcendence, the literary images of which she examines, demonstrating that they remain in constant productive contact. Recapitulating the theoretical findings of ecocriticism, Patryk Szaj shows how literature and literary studies engage with environmental “hyperobjects” (Timothy Morton’s term), insofar as poetry cannot be separated from the decisive, impactful, influence of nature. And since we are constantly reminded of and come back to the stories of nature taking its terrible, if unconscious, revenge on humanity, researchers also turn to images of the terrifying, untamed and defiantly more-than-human nature (Agnieszka Budnik’s article on Henry David Thoreau and Stanisław Witkiewicz, Bartosz Kowalczyk’s essay on Lovecraft). Anna Gawarecka also engages with this question in her text, writing about a Czech novel about an aquarius who decides to become a terrorist, which shows the theme of nature-as-a-threat in a new light. Respectively, film is also able to show nature which imposes its laws on people in a very creative manner – Marek Kaźmierczak writes about the adaption of Tadeusz Dołęga-Mostowicz’s novel Znachor [The Quack], analysing the powerful image of the significant dependence of the human on the more-than-human.

Two translations of Croatian ecocritical texts are of special importance in this issue of Forum of Poetics. Goran Đurđevic and Suzana Marjanić comment on parallel (but not necessarily convergent) research fields. Drawing on different corpora of texts and different traditions of cultural relations with nature, Đurđevic and Marjanić reveal different natures of poetics, but together they respond to the “acceleration” of disturbing ecocritical reflection.

Polish criticism also engages in a dialogue with the problems raised by Đurđevic and Marjanić. Piotr Bogalecki meticulously reconstructs the beginnings of Krystyna Miłobędzka’s poetry, with particular focus on the poetically discovered intersections between the human and the more-than-human. Katarzyna Niesporek writes about Tadeusz Śliwiak’s poetry and his image of nature wounded by people. Klaudia Jakubowicz, on the other hand, writes about the images of waste in the works of the Nobel Prize winner Olga Tokarczuk, who runs a personal campaign against plastic. Marek Hendrykowski, in turn, looks at the issues at hand from a completely different perspective, describing his personal, and very emotional reaction, to Joanna Rajkowska’s art installation Rhizopolis. Reviews of two monographs devoted to the works of Andrzej Stasiuk (Paweł Dziel) and the multidisciplinary works by Witkacy (Aleksandra Kosicka-Pajewska) only seemingly concern other matters, since Stasiuk is one of the most consistent contemporary Polish nature writers, and the problem of the “shadow” in Witkacy’s works immediately evokes the boundary between the human and the more-than-human.

Patryk Szaj, The time is out of joint. Anthropocene and ecocentric reading of literary texts

Joanna Soćko, Dirty transcendence: Remnants of the sacred and changes in contemporary ecopoetics

Piotr Bogalecki, “Not enough for a trace”. On Spis z natury [Register from nature] and other early poems by Krystyna Miłobędzka

Agnieszka Budnik, To the springs, to the mountains: Proto-ecocritical readings of H.D. Thoreau’s Walden and Stanisław Ignacy Witkiewicz’s Na przełęczy

Bartosz Kowalczyk, The music of the abyss: Nature in Howard Phillips Lovecraft’s The Music of Erich Zann

Klaudia Jakubowicz, The issue of waste in the works by Olga Tokarczuk

Aleksandra Kosicka-Pajewska, Between shadow and light