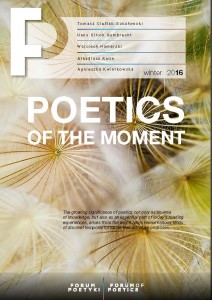 In one of his most important texts on poetics, Hans Ulrich Gumbrecht showed how certain formal aspects of poetry make possible unexpected temporal experiences. As we read a particular poem, time stands still under the influence of the prosody, and a past moment becomes newly present. Gumbrecht links his thesis to the situation of contemporary readers of literature, who, as he observes, have for some time inhabited a particular, expanding form of the present. Experiences like reading a poem add a new temporal dimension to their life, becoming “a little thing we can hold on to for support in a world of universal contingency, temporal mobilization, and spatial blurredness.”

These remarks by the author of Production of Presence could certainly be extended to the tentative assertion that the growing significance of poetics not only as an area of knowledge, but also as an essential part of today’s reading experiences, arises from the way it helps reveal various kinds of discreet temporal formulae that literature proposes. In the case of poetry, we are often, though not always, dealing with a momentary opening up of access to the potential of certain moments in the past. Prose usually offers forms of multidirectional sequentiality, giving us a chance to come into contact with diverse types of time processes, observing transitory and, when we are lucky, revelatory temporal connections, progressions felt for a moment, movements that sweep the reader up in their rhythm.

To the authors of the articles in this issue of Forum of Poetics it seems rather obvious that the poetics of the moment represents only part of a much wider area consisting of temporal poetics, examining the ways literature renders accessible these discreet formulae of time. It was Romanticism that first addressed the uncommon entanglement of poetry with the momentary, as Wojciech Hamerski shows by drawing our attention to the astonishing “poetical poetics” of Friedrich Schlegel. Projects of that kind became much more widespread in the literature of modernism. Franz Kafka occasionally used short forms to record something momentary, referred to by Bartosz Kowalczyk as “blow-ups”; in place of interpretation, they engage the reader’s participation in a presence that stands outside subjective intentionality. Experimental poets such as Miron Białoszewski created irresistibly inviting authorial or, rather, inventive genres that join the “occasional” nature of a certain verse form with the possibly of its duplication (Arkadiusz Kalin). In fact, one can even find a certain type of ars poetica of the moment in the poetry of Marianne Moore (Ewa Rajewska), and the model of momentaneous versification has been proliferating in recent poetry (Tomasz Cieślak-Sokołowski). For that reason, it is worth expanding the contemporary poetological lexicon in directions suggested by the poetics of the moment. We can probably already name some concepts that have been quickly assimilated in their new forms of development; one such example is the return of Stimmung to poetics thanks to Gumbrecht’s work (see Gerard Ronge’s article). A new proposal speaks of the “intertextual after-image” (a concept created Agnieszka Kwiatkowska), which opens perspectives for studying after-reverberations of experience across time, made possible and accessible through literature. Contemporary poetology is also testing out other, original and incredibly important contexts for the poetics of the moment, as proven by Zofia Król’s book on the category of attention (discussed by Joanna Krajewska) and Franco Moretti’s fascinating book on the 18th and 19th century novel and the “gray ordinariness of the bourgeoisie” presented therein (as formulated by Paweł Tomczok in his review). Because each of these examples involves tracing the operations of a work’s formal aspects, we ought to take careful note of Konstanty Troczyński’s archival concept of poetology (Sylwia Panek).

A few years ago, Rita Felski observed that contemporary literary studies have quite an abundant supply of new methods for studying the spatial, where the temporal in literature has, in its complexity and the richness of its many forms, to a large extent eluded the grasp of today’s philological studies. The time has come, then, to take a look at the poetics of the moment.

Tomasz Cieślak-Sokołowski, The Poetics of Indefinition

Hans Ulrich Gumbrecht, How to Approach “Poetry as a Mode of Attention”?

Bartosz Kowalczyk, On the Pointlessness of Observation

Joanna Krajewska, There Is No Salvation Outside Poetry? A Few Questions For Zofia Król

Paweł Tomczok, The Gray Ordinariness of the Bourgeoisie