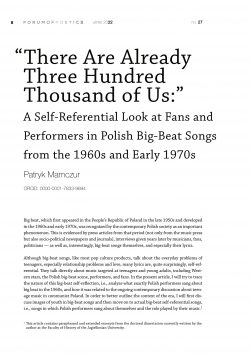 The author focuses on Polish big-beat music from the 1960s and early 1970s. He analyzes the lyrics of selected songs from that period, pointing to their self-referential nature and explaining how big beat performers described their fans, themselves, and teenage music in their songs. Songs by both popular and less known local bands are analyzed. The analysis functions in a broader social and political context, and the study of lyrics is further supplemented with quotations from the contemporary press and statements by politicians, journalists, and managers. The author shows that the self-referentiality present in the lyrics of big-beat songs proves that Polish artists in the 1960s and early 1970s were aware of their lyrical and musical strategies.