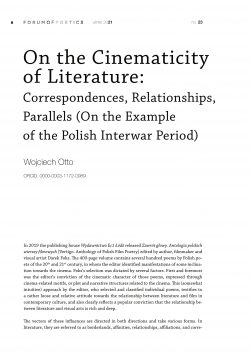 The present paper stems from an awareness of clear correspondences, relations, and parallels between literature and film. The theoretical findings and exemplifications presented in it allow one to precisely identify the so-called points of contact between film and literature, as well as the character of these interactions. Relationships between literature and film are of a parallel character, and their mutual relations are varied and multi-faceted. The cinematicity of literature can include both indirect (community, homology) and direct (proper film-like character) references to film. A structural analysis of individual works of literature should also account for socio-cultural perspectives, limited here to the period between 1918 and 1939. Film inspirations in literature can be considered from the perspective of plot, narration, and genology.