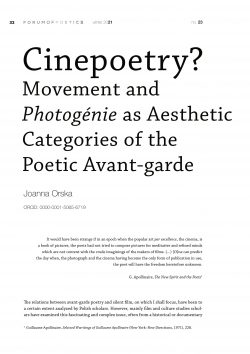 The article tells the story of the early relations between avant-garde silent film and poetry, with a particular focus on critical texts and artistic manifestos from French Impressionist cinema. The poetry or poetic features of art were often evoked metaphorically in the manifestos and other writings produced by Ricciotto Canudo, Germaine Dulac and Louis Delluc. Poetry was treated as a general notion, affiliated with film, often called the “seventh art” and regarded to be the perfect synthesis of all the other arts. Jean Epstein, whose texts and manifestos were very popular in Poland in the 1920s, explicitly linked his theory of film to avant-garde poetry. I argue that many elements of Epstein’s theory, especially in regard to camera movement and photogénie, influenced critical texts and manifestos of the poetic avant-garde in Poland.