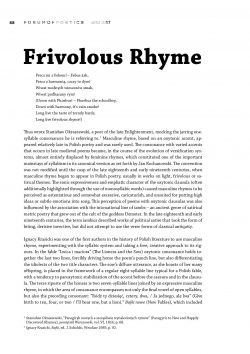 Thus wrote Stanisław Okraszewski, a poet of the late Enlightenment, mocking the jarring one-syllable consonances he is referring to.[1] Masculine rhyme, based on an oxytonic accent, appeared relatively late in Polish poetry and was rarely used. The consonance with varied accents that occurs in late medieval poems became, in the course of the evolution of versification systems, almost entirely displaced by feminine rhymes, which constituted one of the important mainstays of syllabism in its canonical version as set forth by Jan Kochanowski. The convention was not modified until the cusp of the late eighteenth and early nineteenth centuries, when masculine rhyme began to appear in Polish poetry, usually in works on light, frivolous or satirical themes. The sonic expressiveness and emphatic character of the oxytonic clausula (often additionally highlighted through the use of monosyllabic words) caused masculine rhymes to be perceived as ostentatious and somewhat excessive, caricaturish, and unsuited for putting high ideas or subtle emotions into song. This perception of poems with oxytonic clausulas was also influenced by the association with the intonational line of iambs – an ancient genre of satirical metric poetry that grew out of the cult of the goddess Demeter. In the late eighteenth and early nineteenth centuries, the term iambics described works of political satire that took the form of biting, derisive invective, but did not attempt to use the verse forms of classical antiquity.

Ignacy Krasicki was one of the first authors in the history of Polish literature to use masculine rhyme, experimenting with the syllabic system and taking a free, creative approach to its rigours. In the fable “Lwica i maciora” (The Lioness and the Sow) oxytonic consonance holds together the last two lines, forcibly driving home the poem’s punch line, but also differentiating the idiolects of the two title characters. The sow’s diffuse utterance, as she boasts of her many offspring, is placed in the framework of a regular eight-syllable line typical for a Polish fable, with a tendency to paroxytonic stabilization of the accent before the caesura and in the clausula. The terse riposte of the lioness is two seven-syllable lines joined by an expressive masculine rhyme, in which the area of consonance encompasses not only the final vowel of open syllables, but also the preceding consonant: “Ródź ty dziesięć, cztery, dwa, / Ja jednego, ale lwa” (Give birth to ten, four, or two / I’ll bear one, but a lion).[2] Bajki nowe (New Fables), which included the poem, were a later addition to Bajki i przypowieści (Fables and Parables), published in 1779. They were released only after Krasicki’s death, in an edition of his collected works prepared by Franciszek Ksawery Dmochowski in 1802. The confident reply of the lioness thus opens the nineteenth century history of masculine rhymes, an increasingly noticeable presence in Polish lyric poetry, used in poems on a variety of topics, and maintained within various conventions.

In 1816, two poems by Kazimierz Brodziński were published in the pages of Pamiętnik Warszawski, both of which partially used oxytonic rhyming.[3] In the lyric poem “Złe i dobre” (Bad and Good), constructed from four-line stanzas in trochaic tetrameter with a catalexis in the second and fourth lines, masculine rhymes appear in precisely these catalectic clausulas. They are exact if not particularly artful (of 37 rhyming pairs, only three are what the French would call “richissime,” and only four are “riche”). The remaining, feminine rhymes (37 pairs) also lack originality, and only a few would qualify as “richissime” (no more than four). The poem discusses the dual nature of the world, in which suffering is intertwined with joy, evil with good, good fortune and success with adversity and misery.

The alternation of masculine and feminine rhymes (regrettably lost in my English translation —T.W.) does not, however, reflect the ambivalent image of the world so much as represent an imitation of the structure of folk melodies, in which the rhythm of a folk dance or a dumka (in the final phrase) required that the final beat of each measure be accented. A strong influence from the folk tradition can be observed in many of Brodziński’s works. This influence is also highly visible in another poem with the revealing title “Dumka,” published in the following issue of Pamiętnik Warszawski. The story of Czesław weeping at the tomb of Halina draws from Ukrainian elegiac and balladic folk songs, traditionally melancholy in tone, thematically linked to the landscape of the homeland and local customs. The unhappy lover typically remembers his lost maiden:

I am half of you / After your funeral / I wander night and day, / I breathe suffering, / For a shadow that has passed, / I walk, a living shadow.)

The text is accompanied by a musical notation of the melodic line, which determines the oxytonic accent in the third and sixth line of each of the eleven sestinas. Most of the rhymes are rather lackluster (los-głos, pas-las, gór-chmur, equivalent, more or less, to love-dove, moon-June, word-bird), and the poet did not succeed in avoiding repetitions that arise form the limited repertoire of monosyllabic words in (the rhyme dzień-cień appears twice in the poem). The pursuit of rhyme is also responsible for the introduction in many lines of inversion or enjambment, which disrupt the work’s genre conventions, but allow a monosyllabic word to be placed in the clausula.

It is not surprising that masculine rhyme continued to stir up intense emotions in the early nineteenth century. A few months before the publication of the Brodziński poems cited above, Pamiętnik Warszawski published a work of persiflage by Stanisław Okraszewski entitled “Panegiryk nowych a szczęśliwie wynalezionych rymów” (Panegyric to New and Happily Found Rhymes),[4] built entirely on unsophisticated oxytonic rhymes in an ABAB pattern. Masculine rhyme, derisively called “meagre” and “frivolous,” was compared by Okraszewski to the cry of a turkey or the noise of machines in a sawmill, grouped with the rattle of drums and the clatter of gunfire. Applying the “aural criterion” typical for the period allowed the author of the poem to classify such types of consonance as violations of harmony, and to treat poets who use them as deserving to be crowned not with laurels, but with a garland of nettles.

Okraszewski’s mocking poem elicited a reaction from Józef Franciszek Królikowski, who in the next volume of the same periodical published an opinion piece entitled “Uwagi nad jednozgłoskowym rymem (Remarks on Monosyllabic Rhyme),”[5] contemplating the functioning of masculine rhymes in Polish language in a reasoned and judicious manner. “So is it the effect of our language’s poverty, or the obstinacy of poets, or on the other hand, the superiority of our language’s taste over all other languages?” he asked.[6] The comparison with the literature emerging in other European languages, in which masculine rhyme had long functioned and not aroused any controversy allowed Królikowski to appraise the new model of verse speech that demanded artistry and skilled craftsmanship on a higher level than in conventional forms of rhyming. To pronounce masculine rhymes as fully authorized forms of consonance, capable of being used in high poetry, would also, in Królikowski’s view, make possible the development of Polish opera, in which the music sometimes requires the introduction of an oxytonic clausula.

True to the polemical spirit of the age of Enlightenment, Okraszewski responded to his opponent’s article in a later issue of Pamiętnik Warszawski. His text entitled “Myśli moje nad pracą pana Franciszka Królikowskiego o zastosowaniu poezji do muzyki” (My Thoughts on Mr. Franciszek Królikowski’s Work on the Adaptation of Poetry to Music)[7] led to further interventions by anonymous authors signing themselves “S. P.” and “Parishioner on the Bug [River].” These additional voices in fact contribute no new arguments on the issue of masculine rhymes’ legitimacy, which in due course, found its place in Polish versification. Okraszewski’s work is notable, however, as it adapts a strategy rarely encountered in Enlightenment-era polemics: the anti-example. The author showed the incongruity of the Polish language’s system of accent and intonation with the prosody of antiquity, and discussed the impossibility of using certain metrical feet in Polish poetry (iambs, mainly), supporting his line of reasoning with an iambic elegy which he specially prepared for use in this presentation. Okraszewski begins his poem with a somewhat clumsy apostrophe to the Muse who brought inspiration to the great Roman authors of elegy, Tibullus and Ovid:

The elegy quoted here, entitled “Wspomnienia okolic Rzymu” (Memories of the Environs of Rome), is in fact a work of rather low calibre and inevitably gives rise to the question whether its mediocrity is proof of the impossibility of fitting Polish language to the iambic meter, or perhaps merely a testament to Okraszewski’s poetic ineptitude. The history of literature has undoubtedly shown that the iamb, though not propitious to the Polish intonational system, can still function perfectly fine in Polish poetry. Works with iambic rhythms, written without catalexes, hypercatalexes, and other deviations from regular meter, were written by Adam Mickiewicz, and later by, to name one poet, Julian Tuwim.

Okraszewski’s programmatically unsuccessful elegy thus does not so much indicate the limitations of Polish language as it reflects the state of literary-theoretical consciousness toward the end of the second decade of the nineteenth century. In that consciousness, the sense of masculine rhyme’s foreignness is still connected with the belief in the elegy’s superior rank – that highly valued genre of poetry is discriminatingly discussed in all iterations of the ars poetica in the period. The paradoxical rejection of the oxytonic clausula with the simultaneous appreciation of the antique convention of the elegy must have driven the transformation of genre boundaries and caused the abandonment of the elegiac dystych. In some sense, due to the elemental distaste for and distrust toward masculine rhyme, which temporarily rendered impossible all attempts to reconstruct pentameter, the determinants of genre in Polish literature shifted in part from the plane of expression to that of content – the most prominent distinguishing feature of the elegy became its meditative topics and characteristic tone of sad remembrance. While masculine rhyme, though it found itself a place in Polish poetry, was forever removed from the category of mandatory labours for the creators of elegiac poems.

Attempts to imitate the metric verse of classical antiquity in Polish literature involved the need to use an oxytonic accent in the clausula. A dispute broke out in the 18th century in connection with that problem. Polemicists discussed possible ways of transferring to Polish poetry the structure of the standard elegy, as well as the function of masculine rhyme, which was linked to that particular genre. Masculine rhyme, perceived as frivolous and light, was felt by the Enlightenment poets and theorists to be unsuitable for emotional, melancholy lyric poetry.

Previous Post: Ars poetica as the Art of Survival: an Interpretation of Urszula Kozioł’s Poem “Tysiąc i jedna noc” (A Thousand and One Nights)
Next Post: Maria Jasińska’s Zagadnienia biografii literackiej (Problems in Literary Biography)