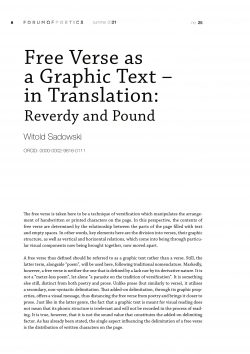 The free verse is taken here to be a graphic text, i.e. a technique operating the layout of signs on a page. The problem of translating thus understood versification into foreign languages is considered here on the basis of Reverdy’s and Pound’s poems. This article puts forward a hypothesis, that misunderstandings resulting from differences between the original structure and the one appearing in the translation are caused by culturally embedded beliefs about the melodic nature of a free verse. At the same time, considerations of the specific role of the translator of a graphic text lead to conclusions as to why that translator sometimes decides to verbalise the semantics of versification and translate the words of the original by means of the graphic layout.