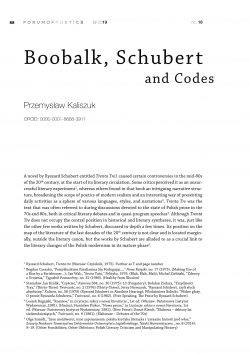 An article presenting intertextual relations included in Trenta Tre written by Ryszard Schubert, which was recognised as a late achievement of Polish neo avant-garde literature. The author demonstrates how Schubert creates references to the romantic literature and to the modernist texts engaged in a dialog with romanticism. He identifies the potential sources for quotations and allusions, and also draws readers’ attention to the relationship between that work by Schubert and an unfinished story  written by Krzysztof Kamil Baczyński. The main purpose of creating the intertextual connections is to present the problem of key oppositions in modern literature, and thus to illustrate the decline of the very formation itself and the downturn in the dynamics of the processes that affected its productivity.

Previous Post: The pleasure of the intertext (in translation): The case of Barthes and Lewańska
Next Post: Tyldy Tildena