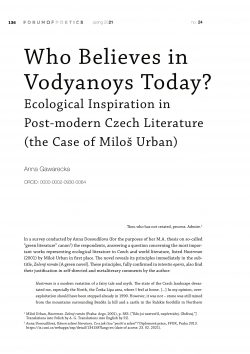 Miloš Urban, a Czech writer, is mostly associated with postmodernist playing with the convention of the metaphysical thriller. In 2001 he published Hastrman, a novel representing so-called green literature, for which he received the prestigious Magnesia Litera award. His concerns about progressive degradation of the natural environment of northern Czechia inspired him to develop a creative method which allows him to highlight threats related to the ecological crisis without excessively lecturing the reader. By reaching for genological models of the nineteenth-century ethnographic novel, combining them with elements of horror and contemporary political fiction and – first and foremost – adding the vodyanoy (i.e., a figure that is not only deeply rooted in Czech cultural memory, but also characterized by an animalistic-or demonic-human ontological duality), Urban achieved a particular ethical undecidability of the protagonist’s actions. The titular hastrman acts for “a good – ecological – cause”, but in order to fulfill his mission, he uses criminal, strictly terrorist methods. As a result, the novel asks questions instead of offering definitive answers, forcing the reader to rethink their own attitude and propose tools for salvation of the gradually, but inevitably disappearing traditional order based on the harmonious cooperation between man and surrounding nature.