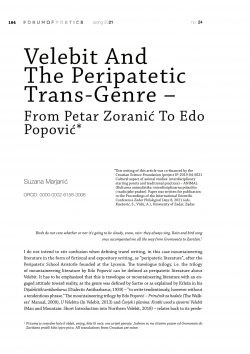 The article interprets Velebit as a space of peripatetic literature beginning, naturally, with Petar Zoranić’s Planine (written in 1536 and published in 1569) wherein, in addition to a personal psychogram on conventional lovesickness (“beteg”), the author problematizes the general situation in his “scattered heritage” (“rasuta bašćina”) (under Ottoman and Venetian threat). As opposed to Zoranić’s imaginary voyage formulated as an allegorical voyage of enlightenment along the paths of Velebit, Edo Popović, in his trans-genre Priručnik za hodače (The Walkers’ Manual) (2009), 440 years after Zoranić (to introduce some symbolism), with his zen-roamings in Velebit and his principle of “voluntary poverty,” as mirrored in Henry David Thoreau’s ecological matrix, equally discloses sociograms of not only “scattered heritage”, but of the global world order, as well. The trilogy of travel writings, of this hiking literature by Edo Popović, can be defined as peripatetic literature about Velebit. Yet it has to be stressed that these are travel writings, namely hiking literature with an engaged attitude toward reality.