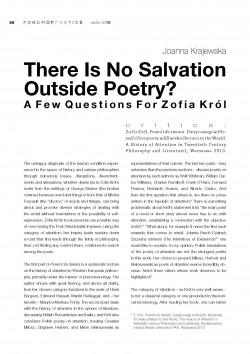 The unhappy diagnosis of the human condition experienced in the space of history and various philosophies through numerous losses, disruptions, disenchantments and alienations, whether drawn (as in Zofia Król’s work) from the writings of George Steiner (the broken contract between word and thing) or from that of Michel Foucault (the “divorce” of words and things), can bring about and provoke diverse strategies of dealing with the world without foundations or the possibility of self-expression. Zofia Król’s book presents one possible way of overcoming the Post-Structuralist impasse, using the category of attention; her inquiry leads readers down a road that first leads through the fields of philosophy, then, not finding any comfort there, continues its search among the poets.

The first part of Powrót do świata is a systematic lecture on the history of attention in Western European philosophy, primarily under the banner of phenomenology. The author shows with great fluency, and above all clarity, how her chosen category functions in the work of Henri Bergson, Edmund Husserl, Martin Heidegger, and – her favorite – Maurice Merleau-Ponty. The second part deals with the history of attention in the sphere of literature, discussing British Romanticism and haiku, and Król also considers Polish poetry on attention, treating Czesław Miłosz, Zbigniew Herbert, and Miron Białoszewski as representatives of that current. The last two parts – less extensive than the previous sections – discuss poetry on attention by such authors as Walt Whitman, William Carlos Williams, Charles Reznikoff, Frank O’Hara, Fernand Pessoa, Bernardo Soares, and Alberto Caeiro. And here the first question that arises is, are there no prose writers in the republic of attention? There is something problematic about Król’s statement that “the main point of a novel or short story almost never has to do with attention, establishing a connection with the objective world.”[1] “What about, for example (I name the first such example that comes to mind), Jolanta Brach-Czaina’s Szczeliny istnienia (The Interstices of Existence)?” one would like to exclaim. In my opinion, Polish translations of the poetry of attention are not the strongest points in this work. Her choice to present Miłosz, Herbert and Białoszewski as poets of attention seems incredibly obvious. Aren’t there others whose work deserves to be highlighted?

The category of attention – as Król is very well aware – is not a classical category or one grounded in theoretical terminology. After reading her book, one can rather say: it did not have such grounding until now. An undeniable virtue of the book is her masterful exposition of the category and powerfully persuasive argument for its interpretative capacity as well as the variety of its applications. Attention, in Król’s definition, is a relationship between the perceiving subject and the perceived object in which the subbject is, firstly, conscious; secondly, convinced of the value of the process of perception; and thirdly, believes that what he or she is experiencing really is as it appears. I would like to focus on the two last components of this definition, which introduce the elements of conviction and belief. The attentive (by all means!) reader becomes aware after the first few pages of the book that it is presenting much more than merely an innovative formulation, a systematic expositon, or an attractive interpretation. An indispensable feature of the poetry of attention is attention to things.[2] Such poetry makes possible a “return of the human spirit to the world.” The second question that needs to be asked concerns definitions. To what extent does the meaning Król proposes to assign the category of attention relate to the possibilities the category describes? Will we also be able to apply the name of attention poetry to poems not overly concerned with that mysterious spirit?

According to Król, European culture privileges the spirit’s escape from the world; one of the first philosophies to undertake a systematic effort to facilitate its return (to its rightful place?) is phenomenology. On the basis of that philosophy, such a return would involve the possibility of newly binding together the possibility of describing things with declarations about their existence. In Husserl, the “return to things themselves” takes place at the cost of contact with their existence. This impasse is overcome, Król tells us, by Merleau-Ponty, who shows that connecting the description of things to the stated belief in their existence is possible. Furthermore, the author of The Phenomenology of Perception includes the body within the scope of phenomenological considerations and underscores the importance of sensual perception, which, in Król’s opinion, allows us wider access to “the world’s skin.” Her invocation of this metaphor from Miłosz, not one that appeals to the imagination, somewhat hinders our understanding of Król’s argument. One must ask, does the spirit return to the world, or perhaps get stuck on the surface (of its skin)?

The book tells the fascinating story of how Merleau-Ponty, despite numerous attempts to overcome his own language – above all, the author demonstrates in the extensive passages on him, through metaphor – failed to heal the broken union of words and things. Where he failed, Król argues, the poetry of attention succeeds, since it is not bound by the rule of reduction. In the course of her argument, she shows how poetry accomplishes the task set before it. There remains something missing, however, some factor that would intermediate between words and things. What is it that allows the word to occasionally break through to the thing in attention poetry? Let us hear Król in her own words:

The contract between word and thing, even if it does not mean the creation of a world but rather its description, can only be returned through “magic,” which takes place outside the order of history and the order of discourse, and in connection with that fact allows us to disregard the entire story of the rupture between language and the world. In attention poetry, more than in phenomenology, the word sometimes manages to get through to the thing precisely due to the possibility of a magical leap beyond the logical impossibility of description (emphasis mine – J.K.).[3]

At the same time, Król is not saying that metaphorical language itself provides poets with the means necessary to take this magical leap. What turns out to be essential is the poet’s self-consciousness and knowledge of the fact that language is simultaneously both a curse and salvation. The attention revealed in the poetic word boils down to the heroic decision to write in spite of everything; the attentiveness of the poetic word is thus primarily the attempt undertaken (in desperation, according to Król) to join things and words, even if it is unfulfilled or unfulfillable. Król further links that attentiveness with the concept of an epiphany, indicating that the scope of that category overlaps partially with the scope of the concept of attention poetry. They nonetheless differ in the vector of their quest, in terms of how they set the boundary between the world and what lies beyond it. Epiphany, even in the secularized sense, is a tool of escape from this world rather than return to it. The poetry of attention, on the other hand, strives to save the object, not by transferring it to another world; instead, it seeks to intensify the object’s being in this world. Here, several issues can raise doubts – how does the author define the world? Is there no solution aside from the un-modern dichotomy of “from the world” vs. “to the world”? Does the phenomenological project end with Merleau-Ponty’s failure? How do her findings relate to non-phenomenological attempts to deal with the dilemma she describes, such as those proposed by speculative realism?

I’m not sure why I thought that Powrót do świata would contain a definition of attention poetry in terms of its poetics, defining the receiver or the act of its reading. I quickly caught on to the fact that at issue was something of much greater importance to the author – salvation (of oneself or objects?). “All of this presents a problem for the historian of the ‘human spirit’ who wishes to use the category of attention to describe certain currents in the history of the return to the world,” Król writes in her introduction.[4] Who is this “historian of the spirit” in the context of the contemporary humanities? I would like to hear the scholar’s answer to this question, an intriguing and tantalizing one for me.

The text is a discussion of the main theses of Zofia Król’s book Powrót do świata. Dzieje uwagi w filozofii i literaturze XX wieku (Return to the World. The History of Attention in Twentieth Century Philosophy and Literature). The text also formulates several questions addressed to the author, including some about the semantic scope of the metaphors that Król employs and others about the phenomenological contexts not suggested by the author for considerations of the history of attention in 20th-century philosophy and literature.