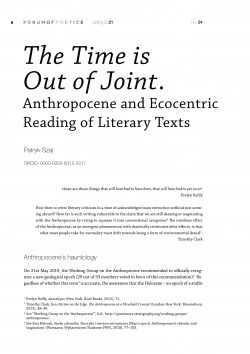 The first part of the paper offers a theoretical consideration of the Anthropocene as an epoch in which human and geological times have radically mixed. It outlines insights formulated within the Anthropocene discourse, as well as findings of climatology. They encourage developing the Anthropocene’s hauntology as an epoch in which “the time is out of joint”. The second part of the paper applies theory to literary studies practice (especially in terms of ecocriticism). Author reconstructs proposals to practice ecocriticism in the times of the Anthropocene formulated by Timothy Clark and Lynn Keller, and undertakes initial attempts at translating them into the Polish context.