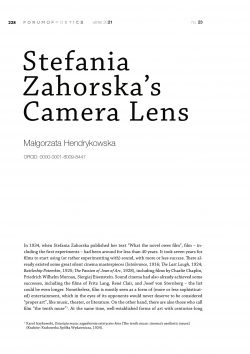 The vast and varied literary output of Stefania Zahorska (1889-1961) including, among others, articles on art history and theory, philosophy, psychology, history of culture, out of which reflections on film theory and criticism have the most prominent position. Zahorska was the most distinguished film critic of the Polish interwar period, due not only to her talent for writing and criticism, but also her erudition, education, and most importantly, independent judgment. While in the 1930s film was commonly seen as a parasite preying on literature, Zahorska in her essay “What literature owes film”, published in 1934 in Kurier Literacko-Naukowy, states that the novel was also slowly getting something from film. She focused on the contemporary Polish novel and the potential benefits which literature could gain from film. She convincingly demonstrated how film inspirations influenced literary concreteness, how – under film’s influence – the spatiotemporal model changed in literature. By analyzing novels “infected” with film, she pointed to its role in shaping contemporary literary metaphors. Her originality of thought stemmed from her breaking from popular discourse regarding the similarities between an adaptation and its source, and her indicating that the relation between film and literature is not simply unidirectional: from literature to film. It can be described beyond the traditional domain of adaptation, in terms of metapoetics and the aesthetics of word and moving pictures. In Poland hers was an important, pioneering voice in terms of how the relations between film and literature were seen.