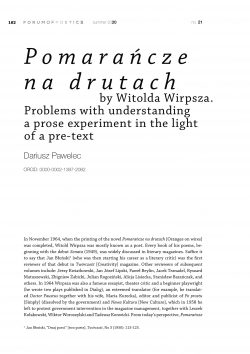 The paper offers a new interpretation of Witold Wirpsza’s novel Pomarańcze na drutach (1964) possible thanks to the microanalysis of pre-texts. Those are first of all materials from the author’s archive preserved in Książnica Pomorska in Szczecin, including 39 pages of typescript with the Polish text of the first edition of the novel from the fall of 1946 and letters sent by Wirpsza from the Gross Born Oflag to his future wife, Maria Kurecka. The early reception of Pomarańcze na drutach was dominated by the question of its form, accepting the poetic form as a quality determinant and a guarantee of the sense of that prose enterprise. The analysis starts from the question of whether interpretative suggestions regarding the linguistic and “poetic” tissue of the text is justified given other documents of reception, whether it is justifiable to indicate a key to understanding the novel beyond its focus on the language itself and beyond properties typical for the linguistic trend in poetry associated with Wirpsza. Interpretation referring to traces left in “pre-texts” stems from understanding the title of the novel as a symbol, connected to the unreal, oneiric, half-fantastical description of the represented world of an Oflag. A review of the genesis documents allows us to incorporate Wirpsza’s letters written in a direct relation to the novel’s time and space, in order to better understand the novel and the title. According to that interpretative proposal, they answer the question regarding “the beginning of the beginning,” for they contain the actual clues regarding the first trace (according to the terminology proposed by Pierre-Marc De Biasi).