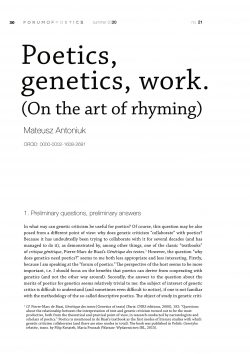 The article attempts to answer the question of what the potential benefits of a methodological cooperation between poetics and genetic criticism are. The answer is based on the definition formulated by D. Korwin-Piotrowska who observes that “concepts and terms in the field of poetics document the cognitive effort involved in studying and describing the work of the human mind.” I argue that we may understand (although, in a limited degree) how “the human mind” works when poetics, in cooperation with genetic criticism, studies not only the final version of the text, but also the text in-the-making (a record of a textual process, i.e. a draft). Combining poetics and genetic criticism, I analyze two poems by Czesław Miłosz, Rozmowy na Wielkanoc 1620 roku [Conversations at Easter 1620] and Na ścięcie damy dworu [On the beheading of a lady at court], demonstrating how the poet arrived at the final rhyme pattern. In the end, I make further theoretical comments in connection with, inter alia, the concept of the “extended mind” and the contemporary subjective and functional concepts of culture.