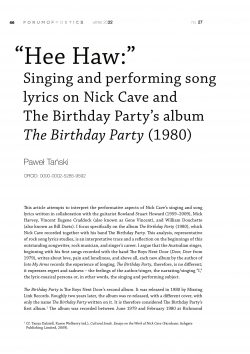 This article attempts to interpret the performative aspects of Nick Cave’s singing and song lyrics written in collaboration with the guitarist Rowland Stuart Howard (1959–2009), Mick Harvey, Vincent Eugene Craddock (also known as Gene Vincent) and William Douchette (also known as Bill Davis). I focus specifically on the album The Birthday Party (1980) which Nick Cave recorded together with his band The Birthday Party. This analysis, representative of rock song lyrics studies, is a receptive trace and a reflection on the beginnings of this outstanding songwriter, rock musician, and singer’s career. I argue that the Australian singer, beginning with the first recordings with the band The Boys Next Door (Door, Door from 1979), writes about love, pain, and loneliness, and show how each new album by the author of Into My Arms records the experience of longing. The Birthday Party, therefore, is no different; it expresses regret and sadness – the feelings of the author/singer, the narrating/singing “I,” the lyrical and the musical persona or, in other words, the singing and performing subject. Cave’s signing is a metaphor for the habitus of punk song miniatures, which are lyrical and vocal expressions of rebellion, filled with irony, while the main principle of the poetics of these works is the grotesque.