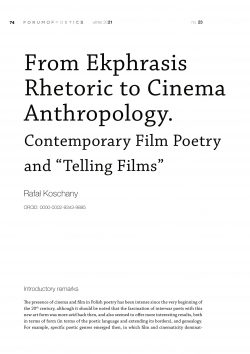 The paper attempts at collecting and interpreting a dozen or so film poems, by authors such as S. Grochowiak, K. Rodowska, A. Kuśniewicz, B. Zadura, K. Hoffman, J. Oszelda, G. Olszański. Out of numerous cases of transmedia relations (film – literature), examples which could be classified as ekphrases according to the rhetorical tradition are distinguished. The phenomenon of poetic film ekphrases has been completed with a cultural context, related to the different traditions of film telling, treated as a common practice (amateur, professional, artistic) and conceptualized with the framework of cinema anthropology.