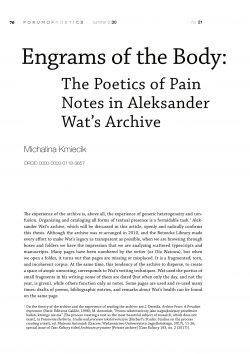 The article focuses on the microanalysis of one of Aleksander Wat’s handwritten “pain notes” (dated December 8, Wat’s archive at the Beinecke Library). I discuss the note’s genological classification, which – due to fragmentation, randomness, and the very nature of the diary entry (and at the same the fact that it eludes this classification) – may not really be considered part of a larger whole. The “non-belonging” of the note and other similar notes seems to influence their poetics. Drawing on the findings of post-structural genology and the theory of fuzzy sets, I propose to see the note as a fuzzy genre that exists in many genological contexts at the same time and also gives rise its own “singular” form. Inspired by Jean-Luc Nancy’s reflections on corporeality and Adam Dziadek’s somatic criticism, I define the note as an “engram of the body.” I analyze an isolated “pain note” as an example and consider the possibility of using this category both in the context of reconstructing the genetics of the text and performing an exemplary rhythmic analysis of prose.