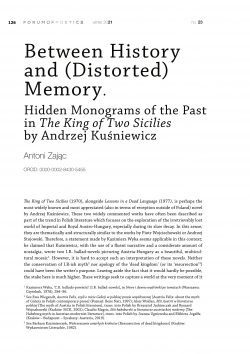 The paper is devoted to The King of Two Sicilies – a novel from 1970 by Andrzej Kuśniewicz. The novel is analyzed as an intertextual, historiographic metanovel, depicting the relations between a single subject, its memory, marked by distortions of transgenerational transmissions, and the historical events it is entangled in. Special attention has been given to those aspects of the novel which, as Paul Coates suggests, make its narrative structure similar to a movie’s structure. The concepts of Siegfried Kracauer, alongside those of Nicolas Abraham and Mária Török, have been also used in the interpretation. These are also the authors of two crucial terms: monogram and cryptonym.