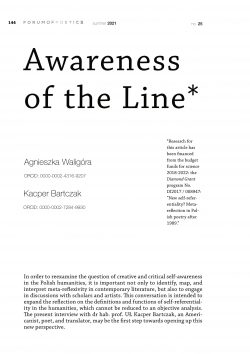 In this interview, Kacper Bartczak, professor at the University of Łódź, Americanist, poet, and translator, talks about creative self-awareness in the broader context of versification studies. The question of meta-reflexivity and its role in the works of literary scholars and poets is discussed first. More specific questions follow, including the conceptualization of the line in poetry and research, the role of the line in organic poetry and translation. Pragmatism (James, Dewey, Rorty, Shusterman, Nehamas), so important for Bartczak, and the role it plays in creative self-awareness is also discussed. Bartczak also comments on American literary theory and twentieth-century Anglo-Saxon poets (Coleridge, Stevens, Williams, Olson, O’Hara, Gizzi, Armantrout).