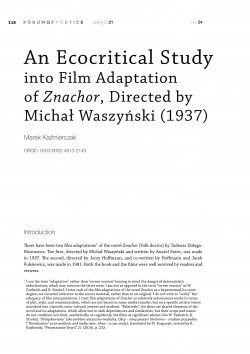 The paper discusses a 1937 film directed by Michał Waszyński, also considering the novel written by Tadeusz Dołęga-Mostowicza which became the source of the screenplay, and the second adaptation of this novel directed by Jerzy Hoffman in 1981. The paper focuses on the interpretation of the film directed by Waszyński in the context of the relations between man and nature which was original and – in some way – went beyond the melodramatic convention. The film is interpreted in the context of the strong tension between traditional Poland and modern Poland, between fiction and reality.