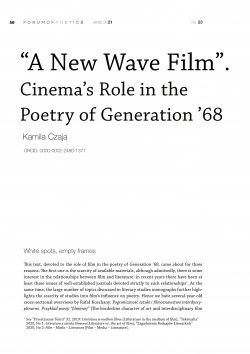 The paper presents the role of film in the poetry of Generation ’68 – mostly by Stanisław Barańczak, but also Julian Kornhauser, Ewa Lipska, and Adam Zagajewski. The New Wave poets referred to actors (such as Humphrey Bogart, Gary Cooper, the duo Laurel and Hardy, Charlie Chaplin, Ali McGraw), characters, titles, scenes, as well as experiences and conclusions related to film genres from cinema and (less commonly) TV productions. It allowed to verbalize or even “translate” issues regarding ethical choices, the condition of a man lost in a clash with the world, (and often doomed to fail in that clash), evanescence, and attempts at escaping from its ruthless rules into sensual categories.