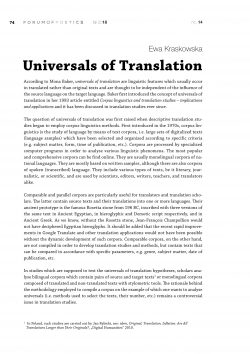 The question of universals of translation was first raised when descriptive translation studies began to employ corpus linguistics methods. First introduced in the 1970s, corpus linguistics is the study of language by means of text corpora, i.e. large sets of digitalized texts (language samples) which have been selected and organized according to specific criteria (e.g. subject matter, form, time of publication, etc.). Corpora are processed by specialized computer programs in order to analyse various linguistic phenomena. The most popular and comprehensive corpora can be find online. They are usually monolingual corpora of national languages. They are mostly based on written samples, although there are also corpora of spoken (transcribed) language. They include various types of texts, be it literary, journalistic, or scientific, and are used by scientists, editors, writers, teachers, and translators alike.

Comparable and parallel corpora are particularly useful for translators and translation scholars. The latter contain source texts and their translations into one or more languages. Their ancient prototype is the famous Rosetta stone from 196 BC, inscribed with three versions of the same text in Ancient Egyptian, in hieroglyphic and Demotic script respectively, and in Ancient Greek. As we know, without the Rosetta stone, Jean-François Champollion would not have deciphered Egyptian hieroglyphs. It should be added that the recent rapid improvements in Google Translate and other translation applications would not have been possible without the dynamic development of such corpora. Comparable corpora, on the other hand, are not compiled in order to develop translation studies and methods, but contain texts that can be compared in accordance with specific parameters, e.g. genre, subject matter, date of publication, etc.

In studies which are supposed to test the universals of translation hypotheses, scholars analyse bilingual corpora which contain pairs of source and target texts1 or monolingual corpora composed of translated and non-translated texts with stylometric tools. The rationale behind the methodology employed to compile a corpus on the example of which one wants to analyse universals (i.e. methods used to select the texts, their number, etc.) remains a controversial issue in translation studies.

According to the most basic definition, universals of translation are typical linguistic features of translated texts which are independent of the language of the source text and the respective language systems.2 However, researchers who agree with Baker’s hypothesis often prefer to talk about tendencies or rights instead of universals, as it is impossible to definitively prove that some features are indeed universal. This notwithstanding, stylometric methods used to analyse comparable corpora actually confirm that on a macro scale such a phenomenon as “translation style” does exist. The following linguistic features are generally categorized as universals of translation: avoidance of repetitions present in the source text, simplification, normalization, discourse transfer, distinctive distribution of lexical items, and, finally, explicitation, which appears to be the most controversial notion. Indeed, literary translators usually try to avoid repetitions. For example, when one translates a book from English into Polish, the monotonous he said is often replaced with such equivalents as rzekł (he uttered), odparł (he replied), or zauważył (he observed). Possible corrections suggested by the authors of the source text and editors also play a role here. The question of self-translation, or the second version of the same text, is particularly interesting in this context. Simplification usually concerns syntax, while normalization is the process of adjusting the language of the source text to the standards of the target language (which usually go against the non-normative stylistic features of the original). Stylometric analyses have demonstrated that simplification and normalization are generally used in the translation of scientific or scholarly texts and feature less frequently in translations of literary works. Discourse transfer is connected with Gideon Toury’s “law of interference” in translation and concerns situations in which the structure of the source text is transferred to the target text, failing to meet the standards of the target language. This phenomenon can be observed, for example, at the level of syntax. Indeed, as a result of unwanted interference, the sentences in the translated text often retain syntactic features of the source language. Translations are also said to exhibit a distinctive distribution of lexical items (i.e. some words appear more frequently in translated than in source or non-translated texts).

Explicitation thus resembles a translation technique called overtranslation. Overtranslation, or amplified translation, consists of inserting additional information in the target text. However, overtranslation is the result of the translator’s conscious decision and usually concerns specific moments in the text, whereas explicitation is a semi-unconscious global cognitive process. Therefore, according to Andrew Chesterman, explicitation manifest itself “beyond the particular”4 and that is why it can be described as a representative example of Mona Baker’s universal of translation.

In the present article, I discuss the concept of the so-called universals of translation, which appeared in connection with the development of corpus linguistics. The hypothesis about the existence of such universals was put forward by Mona Baker in 1993 and it has been discussed in Translation Studies ever since. I also briefly summarize the critical discussion surrounding Baker’s hypothesis.

1 In Poland, such studies are carried out by Jan Rybicki, see: idem, Original, Translation, Inflation. Are All Translations Longer than Their Originals?, „Digital Humanities” 2010.