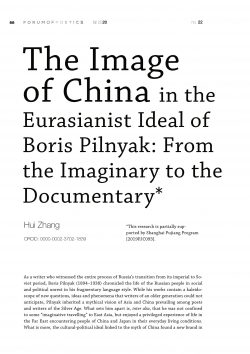 This paper discusses the imagination and description of China in the works of Boris Pilnyak. It proposes that Pilnyak’s fictions and travelogues demonstrate two approaches to the literary representation of China: the imaginary and the documentary. What unifies these two approaches is the underlying Eurasianist vision of the author, which may be seen as a heritage of the universalist stance of Russian modernist tradition, on the one hand, and as a response to the national identity crisis that arose from the contemporary geopolitical circumstances on the other. The imagery of China served largely as a product of poetic imagination in Pilnyak’s works written before 1922, where it continued the palimpsestic inscription of the myth of China in the Russian literary milieu, perpetuating the conceptual internalization of “China” in the self–fashioning of Russia. An example of this is the image of “Kitai–gorod” in his novel The Naked Year, which generated different symbolic meanings of China. From 1922 on, the variations of narrative settings in Pilnyak’s prose reflected the impact of contemporary events in China on his ruminations on the historical relationship of Russia and Asia. Of seminal significance was his excursion to China in 1926, the product of which became The Chinese Diary, in which China figured as a point of reference for Russia in its self–reflection on socio–political and ideological fluctuations. Combining imagination of history and commentary on reality, Pilnyak’s various conceptions of China served to illuminate the shifting identity of Russia from both the mythologized past and the highlighted present.