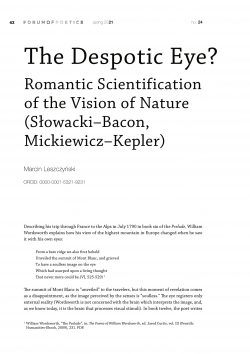 The article discusses and deconstructs the nature-culture dichotomy, examining how the image of nature in Romanticism was filtered through cultural matrices, especially in connection with the development of natural sciences, and the concept of cognition, which was most often perceived as based on the senses. Science, rooted in culture and society, and various cultural codes influenced a new poetics of nature. The analysis of the works by Mickiewicz and Słowacki demonstrates that old astronomical theories (attractive in terms of poetics and aesthetics, though widely rejected) co-existed in poetry alongside newer discoveries (Kepler), ultimately allowing poets to combine modern empiricism and materialism with spiritualism using the same method (inductive reasoning).