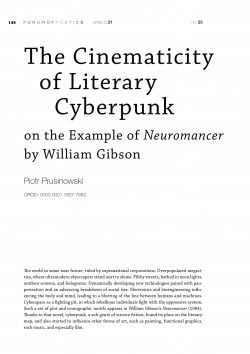 Neuromancer (1984) by William Gibson is considered the first novel representing cyberpunk, a sub-genre of science fiction literature. A vision of a world from some near future, modernized, and at the same time degraded by technology, has been reflected in numerous films. The importance of the role that the cinema itself played in the shaping of the aesthetics of the cyberpunk prose should also be remembered. The example of Neuromancer shows that this influence was not limited to inspirations with plots of such films as Escape from New York (1981) by John Carpenter, but that – most importantly – it manifested itself in the specifically “cinematic” visuality of Gibson’s literary language.