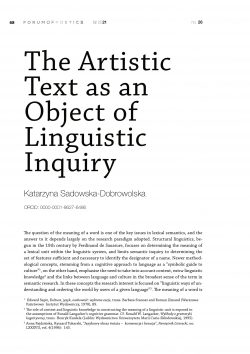 The article is devoted to presenting the possibilities for using linguistic tools to describe semantic phenomena in the analysis and interpretation of an artistic text. The author begins by discussing changes in the concept of meaning resulting from developments in cognitive linguistics, and the consequences of these changes, i.e. the search for a new definition formula and interest in the phenomenon of language creation. She then discusses the relations between convention and creation, pointing out the role of the analysis of artistic texts in research devoted to the reconstruction of the linguistic image of the world. Next, he describes the benefits of including such analyses in linguistic works. He asks questions about the possibility of applying linguistic methodologies in the analysis of texts and puts forward a hypothesis on their usefulness in explaining the mechanisms of language creation and in determining how the final semantic effect in an analysed text was achieved. He then focuses on two selected linguistic theories, i.e. Charles Fillmore’s theory of interpretative frames and Gilles Fouconnier and Mark Turner’s theory of conceptual integration. Moving on to the analytical part of the paper, he discusses, in order, the theoretical assumptions of both research concepts and presents how, with their help, one can analyse and interpret a selected artistic text. The stages of the analysis are presented in the form of a table and a diagram of conceptual integration, which allows the reader to follow its course in more detail. The application of linguistic tools for the description of creative linguistic phenomena allows the author to establish the relations between the meaning-forming components of the text, to explain precisely the mechanisms of creation present in it, and to determine the final semantic effect contained in the work under discussion. The formulated conclusions support the accuracy of the including linguistic analysis used in the study of the text.