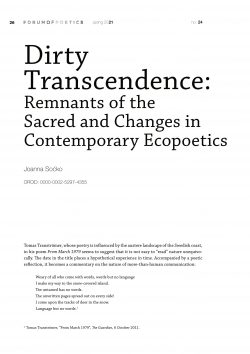 The analysis of a number of late 20th-century nature poems allows the author to redefine the traditional concepts of transcendence and immanence in the context of post-secular studies and the broadly defined new materialism. The article argues that the reformulation of these categories allows one to map the dynamic changes in the 20th-century and 21st-century ecopoetics. The analysis of selected poems written by poets who are well aware of the limits of language, allows the author to draw attention to the debate around the concept of the Anthropocene, a significant turning point in itself. The article discusses current poetic tendencies, taking into account the impact of the Anthropocene.