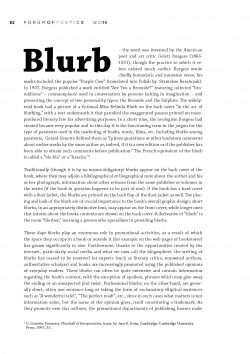 – the word was invented by the American poet and art critic Gelett Burgess (1866-1951), though the practice to which it refers existed much earlier. Burgess wrote chiefly humoristic and nonsense verse; his works included the popular “Purple Cow” (translated into Polish by  Stanisław Barańczak). In 1907, Burgess published a work entitled “Are You a Bromide?” featuring collected “bromidioms” – commonplaces used in conversation by persons lacking in imagination – and presenting the concept of two personality types: the Bromide and the Sulphite. The widely-read book had a picture of a fictional Miss Belinda Blurb on the back cover “in the act of blurbing,” with a text underneath it that parodied the exaggerated paeans printed on mass-produced literary fare for advertising purposes. In a short time, the neologism Burgess had created became very popular and to this day it is the functioning term in the jargon for the type of paratexts used in the marketing of books, music, films, etc. Including blurbs among paratexts,  Gerard Genette defined them as “[p]ress quotations or other laudatory comments about earlier works by the same author or, indeed, if it is a new edition or if the publisher has been able to obtain such comments before publication.” The French equivalent of the blurb is called a “bla-bla” or a “baratin.”[1]

Traditionally (though it is by no means obligatory) blurbs appear on the back cover of the book, where they may adjoin a bibliographical or biographical note about the author and his or her photograph, information about other releases from the same publisher or volumes in the series (if the book in question happens to be part of one). If the book has a hard cover with a dust jacket, the blurbs are printed on the back flap of the dust jacket as well. The placing and look of the blurb are of crucial importance to the book’s overall graphic design; short blurbs, in an appropriately distinctive font, may appear on the front cover, while longer ones that inform about the books contents are shown on the back cover. A derivative of “blurb” is the noun “blurber,” meaning a person who specializes in providing blurbs.

These days blurbs play an enormous role in promotional activities, as a result of which the space they occupy in a book or outside it (for example on the web pages of bookstores) has grown significantly in size. Furthermore, thanks to the opportunities created by the internet, particularly social media and what we now call the blogosphere, the writing of blurbs has ceased to be reserved for experts (such as literary critics, renowned authors, authoritative scholars) and books are increasingly promoted using the published opinions of everyday readers. These blurbs can often be quite extensive and contain information regarding the book’s content, with the exception of spoilers, phrases which may give away the ending or an unexpected plot twist. Professional blurbs, on the other hand, are generally short, often one sentence long or taking the form of exclamatory elliptical sentences such as “A wonderful tale!”, “The perfect read!”, etc., since in such cases what matters is not information value, but the name of the opinion-giver, itself constituting a trademark. As they promote new star authors, the promotional departments of publishing houses make an intensive effort to obtain blurbs from personalities whose fame is well-established. For example, on the front cover of a crime novel by Katarzyna Bonda entitled Pochłaniacz (Absorber; Warszawa 2014) there looms a blurb signed by another best-selling author in the genre, Zygmunt Miłoszewski: “Remember her name. Katarzyna Bonda is now the queen of Polish crime fiction.”

The poetics of the blurb is not complicated and depends on the themes and genre of the book being promoted: one set of laws governs the blurb advertising belles-lettres, another set those for scholarly works, and yet another applies to the blurbs we see, for example, on the cover of a cookbook. Nonetheless, in each case a central role is played by three factors: succinctness, communicativity, and the rhetorics of praise, wherein hyperbole is used with particular frequency.

Genette singles out a category of paratexts that he defines with the term allographic, that is, signed by the author.[2] They include le prière d’insérer (“please insert”), whose marketing-based character reveals a similarity to the blurb. In the past, these were a kind of insert: loose sheets of paper with a short original promotional description (for example a partial summary of the work), included with reviewer copies of the book and intended to encourage experts to write reviews of it for publication in a well-known magazine. Since they were not an integral part of the book, but merely an addition to it, Genette finds them to be a form of epitext: “any paratextual element not materially appended to the text within the same volume but circulating, as it were, freely, in a virtually limitless physical and social space”;[3] moreover, as he underscores, this initially external element can become incorporated into the book in later editions.

It is mostly beginning authors who are expected to provide descriptions of their works themselves, while for new releases from established authors, the promotional department of the publishing house handles this aspect of the book. On the internet, one finds many instructional guides to writing (self-)promotional descriptions. Although in Anglo-American book culture such descriptions are also usually called blurbs, in the Polish and some other European contexts there is a tendency toward strict separation of these two categories of paratext. The poetics of the description has been described as follows by Agnieszka Łasek of Wydawnictwo Czarne: “A lot of facts, a dash of mystery, a hint of something left unsaid. And atmosphere. If it manages to convey the mood of the book, that means the description is a success. There is no guarantee of growth, a description must primarily be truthful. We want readers to trust us and keep coming back.” In descriptions accompanying novels, particularly in the area of genre literature, this dramatic effect sometimes takes a maximally condensed form, as a result of which its effectiveness is intensified; Bonda’s Pochłaniacz, mentioned above, featured the following sentence in addition to Miłoszewski’s blurb: “Only a scent remained at the scene of the crime,” and beneath the title of another work by the same author, Okularnika (Cobra), we read: “No body, no crime.” A blurb can sometimes be a collector’s item – some books or even their covers or dust jackets are especially valuable because of the cover, or rather the signature found there.  A famous example of this is the copy of the second edition of Walt Whitman’s Leaves of Grass from 1856, which has the following words written by Ralph Waldo Emerson printed on the spine: “I Greet You at the Beginning of a Great Career.” It is a quote from an enthusiastic letter that Emerson sent to Whitman, after he received a copy from Whitman of the book’s first edition (1855), published at his own expense (the entire letter was printed in the second book as a kind of appendix). Whitman’s decision was criticized by literary circles at the time, particularly since the text of the letter was used without the knowledge or permission of the sender.

The future of the blurb is uncertain. Perhaps with the spread of e-books and microblogs (such as Twitter feeds) it will cease utterly to be materially linked with books and will be transferred  entirely to the realm of the internet. On the other hand, for traditional book publishers, the blurb may become an increasingly important element in attracting the attention of potential buyers, with the result that both its verbal and visual shape will be explored more inventively than they are today.

This definition of “blurb” presents the origin of the term, a sketch of its history, and some of its contemporary uses.