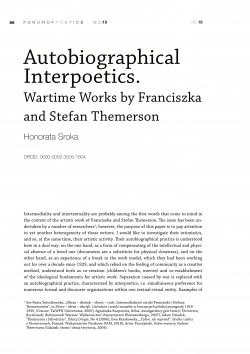 The paper discusses the wartime autobiographical practices by Franciszka and Stefan Themerson characterized by interpoetics, i.e. simultaneous preference for numerous formal and discourse organizations within one textual-visual entity. The paper analyzes the personal documents and literary works of those avant-garde writers. It is proposed to read the written and visual autobiographics according to three forms of representation: document, secondary aesthetization, and stylization. Based on this paradigm, the paper stresses the peculiarity of the Themersons’ activity from the years 1940-1942, stressing the discreteness of this moment as opposed to the former and later literary work by the couple.