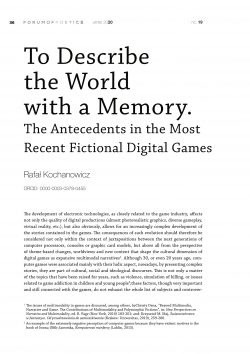 The development of digital role-playing games brings with it not only qualitative transformations, but also a change in the choice of topics. An example of it is the “moral change”: game developers increasingly refer to family issues. As a result, there are changes in the method of creating the story presented in the game. The role of the game’s retrospectives is becoming more and more important in a variety of ways. The functions assigned to them are connected with both the introduction of moral issues to the games and with world creation, because the descriptions of the world presented in the retrospective perspective become the basic source of information about its boundaries and features.