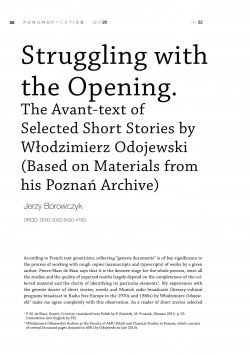 The paper reconstructs and analyzes the avant-texts of three short stories by Włodzimierz Odojewski, representing the mature, late phase of his work: Ku Dunzynańskiemu Wzgórzu idzie las, Co słychać w ojczyźnie, Sezon w Wenecji. The paper is based on Odojewski’s archive at the AMU Faculty of Polish and Classical Studies in Poznań. Subsequent editions of the opening paragraphs of the three stories mentioned above were selected as a special object of reconstruction and analysis. In the text-forming process of each one Odojewski edited the text several times. In each case a different tendency proved to be a superior characteristic of the writing effort – in one case the aim was to show a suspension of a protagonist’s consciousness, in one – to postpone a meeting between the narrator and his old friend, and in one – reducing the temporal and personal distance. The genetics of selected texts by Odojewski provides significant clues and impulses for making new (or deepening and correcting the already existing) interpretations of the studied short stories.